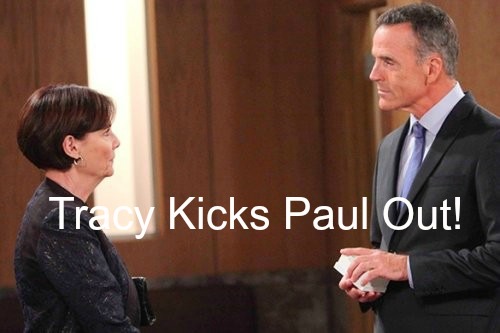 “General Hospital” (GH) spoilers indicate that Paul Hornsby (Richard Burgi) will soon be called to answer for his carnal actions with temptress Ava Jerome (Maura West). Tracy Quartermaine (Jane Elliot) has been played for a fool again and does not like it.

Paul has been getting steadily closer to Tracy in recent months. Whether Paul was leading Tracy on and cares nothing about her is a big question. Even if Paul does have fond feelings for Tracy, there was no foundation there for a healthy relationship.

Tracy does not need a guy who claims to care about her then shags his partner-in-crime on the side. When Paul first came back to Port Charles, Tracy was suspicious of his motives and why he was around and she was right to be on her guard.

The only reason she let Paul get close was for revenge sex to get back at Luke Spencer (Anthony Geary). But once that passed, Tracy put Paul at arm’s length because she remembers his philandering ways and the years he’s been estranged from her and her son.

Paul’s bonding with Dillon Quartermaine (Robert Palmer Watkins) has helped Tracy warm towards her ex but after Tracy caught him naked and on top of Ava – all bets are off. There’s really nothing Paul can say to make what Tracy saw any better.

There’s no explaining away what she saw, or diminishing it, or saying it was something else. Everyone in that room knew exactly what was happening. Now it’s just a matter of dealing with the fallout. With his pants on this time, Paul will try to explain himself to Tracy.

What was he thinking running after her into the MetroCourt hallway in a robe trying to make it seem like it was no big deal? It was a huge deal. And how Paul handles this now will impact his relationship with both Ava and Tracy.

So Paul will put on his bog boy pants and, in coming days, we’ll see him try to bargain with Tracy. But now Tracy’s shields are up and she will tell him to pack his bags and get out of the Quartermaine casa. And who can blame her?

Paul will not want to go because living at the Qs gives an air of legitimacy to his presence in Port Charles. His ties to the Quartermaines, along with his position as DA are critical to Paul’s cover persona that allows him to operate as a closet criminal.

Paul cannot afford to lose both his position as Q-adjacent and his slot as DA. And Tracy poses a threat to both because of what she knows. Paul will try and appeal to her good side, but Tracy doesn’t have any pity for him and is over and done with him.

Not only will Tracy kick him out of the Q mansion, but she’ll also threaten to spread around Port Charles that the DA had the infamous female mobster tied up in his bed. Maybe Paul can tell Tracy what she saw was part of his “tough on crime” program.

The Tracy-Paul confrontation will not end well for the dirty DA. Where will he go if Tracy won’t relent on evicting him from her family home? Most wayward souls with money seem to end up at the MetroCourt. Ironically, it was being in a hotel room at the MetroCourt that started all this…

Maybe Anna Devane (Finola Hughes) is looking for a roommate – wouldn’t that be fun to watch? Ava probably wouldn’t mind Paul being her roomie, but he can’t afford to have any more public contact with her. In fact, he may withdraw somewhat from Ava now which could affect their mob dealings.

Stay tuned to GH to find out what happens to the disgraced DA and whether he can keep Tracy quiet about this nefarious matter. And check back with CDL often for tons more “General Hospital” spoilers and news.