BY Sean O'Brien on October 28, 2015 | Comments: one comment
Related : General Hospital, Soap Opera, Television, The Young and the Restless 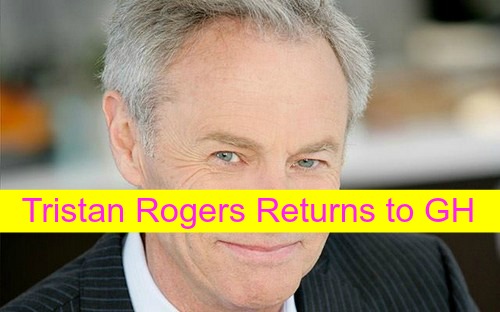 “General Hospital” spoilers and casting news confirm that The Young and the Restless star Tristan Rogers is headed back to GH as fan favorite Robert Scorpio! Rumors have been teasing for over a year now that Tristan Rogers was returning to Port Charles, but they never seemed to come to fruition – until now. Executive producer Frank Valentini confirmed the news today!

Valentini dished on Robert Scorpio’s return to “General Hospital” and stated, “Scorpio is such a beloved legacy character who evokes a sense of nostalgia and I know the fans have been patiently waiting for Tristan’s return. I share their sentiments and enthusiasm and that of our entire GH team in welcoming him home. It’s been a fantastic week of casting announcements for GH, but it’s not over yet.”

“General Hospital” spoilers are not clarifying for how long Scorpio will be in Port Charles – and whether or not this is just a brief appearance or if Tristan Rogers signed a contract with the ABC soap opera. This has actually been a big week for the fictitious Scorpio family.

Just a few days ago GH spoilers revealed that Robert’s daughter Robin Scorpio-Drake (Kimberly McCullough) was headed back to Port Charles, and yesterday news broke that Robin’s mother Anna Devane (Finola Hughes) had also scored an extended contract. It can’t be a complete coincidence that Robin and Robert are both due back in Port Charles around the same time – we can’t wait to see what the GH writers have in store for us.

Of course, Tristan Rogers’ fans are curious to know how this huge casting spoiler will affect his stint on “The Young And The Restless.” Does this mean that Colin is leaving the CBS soap opera? Or did the two networks finally come to an agreement and figure out a way to work with each other and share Rogers? Share your thoughts in the comments below and don’t forget to check CDL tomorrow for more “General Hospital” spoilers and news!