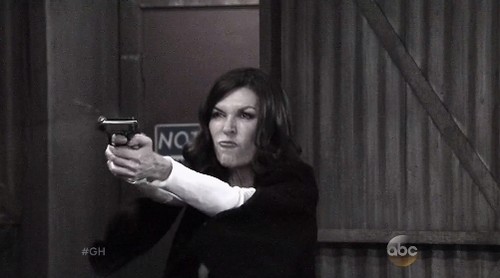 General Hospital spoilers examine an intriguing possibility that will have GH fans seeing a previously masked side of a favorite character. Now that Anna Devane (Finola Hughes) is back in Port Charles, don’t look for her to be the same old Anna we’ve grown to know and love. Just before Anna left town, she saw the love of her life, Duke Lavery (Ian Buchanan) die in her arms. That leaves scars. Then, in short order, Anna summarily executed Duke’s killer Carlos Rivera (Jeffrey Vincent Parise) even though she’s always been a law and order gal.

These dubious events may have flipped Anna’s “evil switch” on and there’s no telling what she’s capable of at this point. What’s interesting is that Anna will likely still claim to be on the side of good, but she’s crossed a line and will continue to skirt the law, particularly now that she’s not operating behind a badge. Here’s what may be coming for Anna and why she may shock those who love her best.

Anna will pair up soon with Sam Morgan (Kelly Monaco) for a lady private investigator type of partnership and we know Sam has a history of making shady choices even though she’s on the straight and narrow now. But will Anna lead Sam back into her old life of crime? Will we see these two picking locks and scamming the men in their lives to get what they want?

And what about Kyle Sloane (Robb Derringer)? Sloane is a very bad influence on Anna – he helped her to dispose of Carlos’ body but then conveniently kept the murder weapon with her fingerprints on it to leverage Anna. On a side note, if there’s no body, why would a gun with fingerprints matter? Rumor has it that Carlos’ body may turn up yet but, until then, the gun isn’t as much leverage as Sloane thinks.

There are other rumors swirling that Sloane is not the only person aware of Anna’s recent actions. But who else could know about Carlos’ murder? The most obvious choice is Nikolas Cassadine (Tyler Christopher) since he and Sloane are close and co-conspirators. If they were each sharing and airing dirty laundry, Sloane may have bragged about having Anna under his thumb due to the murder.

And Carlos’ killing isn’t the only time in recent history that Anna has taken the law into her own hands – remember she and Robert Scorpio (Tristan Rogers) essentially kidnapped and imprisoned Cesar Faison (Anders Hove) in the secret catacombs on Spoon Island just off the coast of Port Charles. Plus, Anna has pushed the limits of the law on a number of other occasions over the decade.

But the question is, has Anna given up on law and order? While it’s safe to assume that Anna will not turn into a criminal – at least not technically – but the murky path that she may go down is that of a righteous vigilante. Anna wants to make Mayor Lomax (Saidah Ekulona), Nikolas and Sloane pay for rigging the election, but will she stop there? Could Anna turn into Port Charles’ very own dark avenger?

It’s about time that Anna got a plot line worthy of her rich history on General Hospital that will stretch her acting chops. Be sure to check back with CDL often for more “General Hospital” spoilers, gossip and news. We’ve got daily Port Charles dish you’ll love!