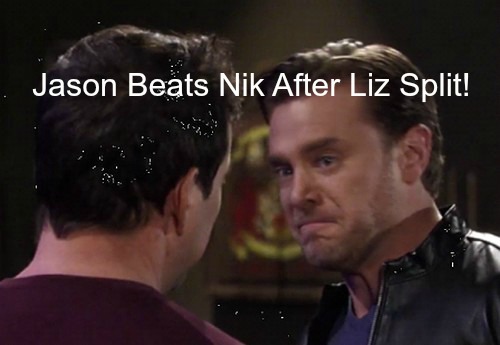 “General Hospital” (GH) spoilers tease that Jason Morgan (Billy Miller) will be spoiling for a major – and perhaps final – showdown with Nikolas Cassadine (Tyler Christopher) over the Prince’s involvement in his identity secret.

Now that Jason knows Liz Webber (Rebecca Herbst) knew who he was, the next thing he’ll want to know is how she knew. Even if Liz doesn’t want to drag Nik’s name into it, Jason will know. But if Liz is smart (and she is), she’ll hang Nikolas out to dry.

If Liz can get Jason to focus his anger on Nikolas then he might not leave her – he might not blame her. Liz may even try and sell it that she’s a victim too since she didn’t know before she fell for Jake Doe that he was Jason.

But Jason is smart too. His brain may be addled, but he will be able to do the math on how long ago the Nurse’s Ball was and how many months she was lying to him. Plus, Liz was right up close watching his struggle over not knowing his identity.

Jason may see what she did as heartless even though she claims to love him. And, of course, Liz truly does love him – she’s loved him for so long. But Jason’s love for Liz will not be enough to hold back his outrage.

Jason will be so mad that he wants to take out his frustrations physically – but he can’t hit Liz. Jason might yell at a woman (as he did with Sam) but he won’t touch one in violence. But Nikolas is a whole different matter.

We’ll see Jason find Nikolas at The Floating Rib with Hayden Barnes (Rebecca Budig) and Jason just attacks! We’ve seen him threaten Nikolas with violence before and Nik was always intimidated – yet still smug. But Nik should be really scared this time.

Jason will punch Nikolas with everything he’s got – apparently those Cassadine muscles are just for show because he never seems to be able to stand up to Jason. Or maybe it’s because Nikolas knows just how dangerous Jason truly is.

Hayden will likely intervene to stop the attack from going further. Will Nikolas defend Liz and shoulder the blame since he knows Jason will be the same amount of angry at him either way? Will Jason also confront Hayden?

After all, Hayden came to the garage to tell Jason she knew his identity but then she was shot. Hayden should be safe if Jason still believes she’s also an amnesiac. But if not, he may wonder why she didn’t try again to tell him his identity.

Hayden has the best excuse of all – she can now state that she was the target of the hit, and not Jason and that someone wanted her silenced at all costs. If she shares that tidbit, could Jason realize that Nikolas was the likely culprit in her shooting?

The bottom line is, Nikolas and Liz are about to be persona non grata all across Port Charles for these lies. Is the attack on Nik the last thing Jason will do before he heads out of town for a bit? Remember when he found out his identity, he fled.

Jason was so frustrated with finding out he was Jason Morgan, he took off on his motorcycle. Will he do the same this time when he founds out the woman he loves and was going to marry deceived him? Will Jason put Port Charles in his rear view mirror for a while?

GH spoilers reveal that Billy Miller is taking a short break after all the non-stop work since he’s been the focus of the show for months now. That means showrunners will likely write him out for a number of episodes. Leaving town angry makes sense.

So what do you think, GH fans? Is a punch in the face enough punishment for Nikolas? Or should Jason inflict real bodily harm on the Cassadine heir? What sort of penance is fit for what Nik has done to Jason? Share your comments below. And come back to CDL for detailed daily “General Hospital” spoilers, gossip and news.

Unexpected surprises are in store for today’s #GH. Don’t miss out on them!