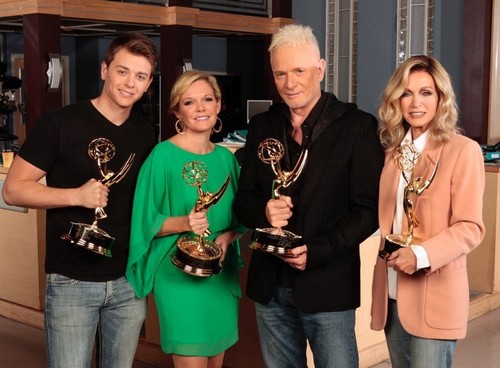 “General Hospital” spoilers are confirming that Anthony Geary is leaving the ABC soap, and his iconic character Luke Spencer is exiting the GH canvas for good. GH rumors have been floating around for months teasing that after Geary’s epic Fluke storyline wrapped he would be leaving the soap opera, however the actor nor TPTB at “General Hospital” would confirm whether he was quitting. However, according to a new report from Soap Opera Digest and an exclusive interview with Tony – Lucas Spencer’s time in Port Charles is coming to a close.

“General Hospital” spoilers from ABC Soaps In Depth reveal, “It was a real shocker to the daytime industry: Anthony Geary — the genre’s historic eight-time Emmy Award winner — is walking away from GENERAL HOSPITAL! After nearly 40 years of playing Luke Spencer, the highly-respected actor is exiting the role permanently later this summer.”

Anthony Geary has been playing the part of Luke Spencer since 1978 – and recently blew GH fans’ minds with his portrayal of Fluke, an alter ego of his character’s that came to the surface due to trauma he experienced as a child. Geary’s bout with Disassociate Identity Disorder lasted over a year on the ABC soap, and just recently came to a close. GH rumors teased that the Fluke storyline was Geary’s grand finale before he planned on exiting the soap opera for good – and they turned out to be 100% true.

Geary sat down with TV Digest’s Michael Logan to discuss quitting the ABC soap and dished some “General Hospital” spoilers regarding Luke Spencer’s exit. Tony explained, “I’m just weary of the grind and have been for 20 years. There was a point after my back surgery last year where it became clear to me that my time is not infinite. And I really don’t want to die, collapsing in a heap, on that GH set one day.” Seeing as how Luke Spencer has been an iconic character on “General Hospital” for nearly 40 years – we are sure that the writers have something huge planned for his exit.

Although Geary couldn’t totally spoil Luke’s exit from “General Hospital,” he did offer this juicy tidbit during his interview with Logan, “For me, it makes perfect sense that he is left standing alone and that he must go off and find his purpose in life with whatever time he has left. His children are grown, and being a father and grandfather was never fulfilling anyway. It’s no longer fun to careen from adventure to adventure. He’s never had a proper job. What’s he going to do, become a bank manager? If I were in his place, I’d go to Tibet or Nepal on some kind of spiritual journey, even though he’s an atheist.”

So “General Hospital” fans, are you as upset as we are to see Anthony Geary exit? How do you think the writer’s will write his big sendoff? Will the soap opera survive without the iconic Luke Spencer character? Let us know what you think in the comments below and don’t forget to check CDL tomorrow for more “General Hospital” spoilers and news!