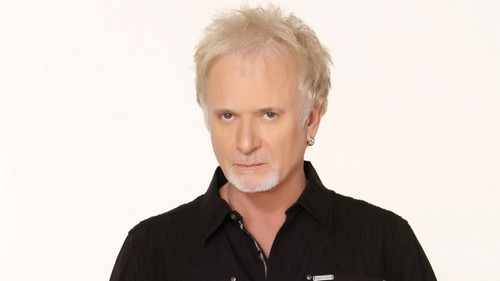 General Hospital spoilers reveal that Anthony Geary let loose with both barrels in an exit interview he gave recently and nobody was spared, not GH head writer Ron Cavalarti and not current storylines either! Luke Spencer (Anthony Geary) is heading out of Port Charles on July 27. On screen, Luke will say goodbye to Sonny Corinthos (Maurice Benard) and head off into the foggy beyond. But off screen, Geary is going out in a blaze of glory that may shoot to hell any chance that he’ll be allowed to reprise the role of Luke Spencer – and maybe that’s what he intended…

It seems like 37+ years of dealing with the hassles of the network, producers and especially the General Hospital writing staff have finally taken their toll on Geary. In a recent interview with TV Insider, the actor was vocal in his dislike for many of the recent contrived plot lines involving Luke as he prepares to depart Port Charles and throws head writer Ron Carlivati under the bus several times.

Here are some of the juiciest highlights from no-holds-barred interview and a sampling of Geary’s most caustic comments.

Fact: He’s sick of Luke and Laura
Legions of fans may be crushed by this revelation, but Geary made it clear that he’s sick and tired of the whole Luke and Laura thing and revealed that Genie Francis (Laura Spencer) is over it too. He said, “We’ve both been dragging the corpse of that relationship around for 30 years.” Wow. Just wow.

Fact: He adored Gloria Monty but…
Geary mentions working with Monty as one of the highlights of his time on GH (the other was working with Elizabeth Taylor). He says she was radical but no one would hire her now because they’re too scared then says “a new, radical, approach” otherwise he thinks daytime soaps can’t be saved.

Fact: He’s tired of being judged for how he looks shirtless
We all enjoy the eye candy, but Geary has a point. He says that an actor’s resume “is less important than how he looks with his shirt off” and adds that if you’re not working out enough, you can lose your job to someone with “bigger pecs.” Could he have been insulting some of his buff co-cast members?

Fact: He’s also annoyed about social media
This could just be a product of his age, but Geary also complained about actor’s being cast based on how many Facebook followers they have or how active they are on Twitter. We get it – it’s an integrity issue, but with those bad ratings, GH will continue to pressure its actors to be active on social media.

Fact: He thinks the world of soaps is toxic
Specifically, Geary characterized the behind the scenes politicking of network soaps as a “rat-infested jungle” and says the heavy handed writing style that micromanages the actors attempts to “thwart any creative moments” that the younger, rising actors might have.

Fact: He hates being told how to do his job
The sense you get throughout the interview is that Geary’s biggest beef is with the writers, one in particular. He says “I’m literally told where to take a deep breath” and says the GH writers have a “mistrust of actors on our show, as if we’re going to misunderstand the material.”

Fact: He seems to intensely dislike Ron Carlivati
Geary refers to Carlivati only as “the writer” and reveals that Carlivati has never spoken to the legacy actor – ever – not even at awards shows when they sit within spitting distance. Geary says “We’ve sat at the same table at the Emmys and what not, but he never has anything to say to me.” What? No!

Fact: He thinks the Frank Smith and Jake Spencer plots are stupid
In Geary’s way of thinking, Luke’s perfect exit point was after the reveal that he killed both his parents (heartily agree). But instead, writers resurrected both Frank Smith and little Jake Spencer as part of the exit plot. He says, “It was ill-conceived, cheesy and showed a lack of imagination.” Ouch.

Fact: He hates redemption
Geary says bringing little Jake back to life to try and redeem Luke was a waste of one of the “best stories we’ve told” referring to the poignant death of the beloved four year old. He says some fans may have felt that Luke needed redemption but said of the plot “I was not thrilled.”

Fact: He did not like former showrunner Wendy Riche either
Geary admitted his recent issues were not with Frank Valentine, but Ron Carlivati. But he also took a pot shot at former GH exec producer Wendy Riche saying “she never much cared for me” then says his take on her was that he was “not about to let some new hire tell me how Luke would express an idea.”

In short, Geary is heading for Amsterdam with glee and doesn’t seem a bit sad to be done with the bureaucracy of the writers and producers of GH. What he has made clear, though, is that it’s his fellow actors he will dearly miss. Geary castigated the writers in one breath then flattered on-screen son Lucky Spencer (Jonathan Jackson) in the next, calling him “A real Renaissance man… I so admire him.”

And of love interest Tracy Quartermaine (Jane Elliot) Geary said, “Jane remains the most underused genius in daytime television, and that’s such a mystery to me. I think they’re being foolish not to let her lead GH, make her the head of the mafia or something. It’s such a waste of a great character, a great legacy and a fabulous actress.” Agreed.

Bon voyage Luke – we wish you well – and thank you for the parting gift of your honest appraisal of what’s wrong – and right – at General Hospital.

Check back with CDL daily for more “General Hospital” spoilers, scoop and more.