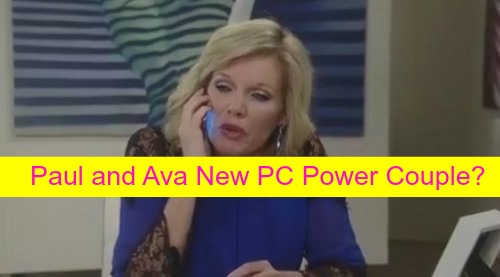 This “General Hospital” (GH) spoilers digs into the possible romance between the two killer mobsters that may heat up Port Charles and make it more steamy and dangerous than ever! Have you noticed the killer chemistry between Ava and Paul?

On the plus side, Paul Burgi (Richard Hornsby) is a handsome devil and is age-appropriate as a romantic interest for Ava Jerome (Maura West). On the downside, he’s capable of cold blooded murder and has an itchy trigger finger. However, Ava has also been known to kill when she needed to, so this may well be a match made in mobster heaven if these two give in to the undeniable attraction they share.

An Ava and Paul romance would be a hot storyline on GH and “General Hospital” rumors are swirling that the two mobsters will hook up at some point. We saw a hint of it last week when Ava appealed to Paul to not push her on the mob task he asked of her until she got her custody situation sorted. In an uncharacteristic move, Paul softened and told her it could wait.

This romance could also push the buttons of the people in Ava and Paul’s lives in a big way. Morgan Corinthos (Bryan Craig) would be enraged to see Ava hooking up with the Port Charles DA, not knowing he’s also a secret Jerome mobster – he may think Ava is sexing the guy up to help her custody case. Morgan will also be jealous that Ava has moved on since she told Morgan he was her true love.

Tracy Quartermaine (Jane Elliot) would be similar incensed since she and Paul slept together a couple of months ago and have been flirting while co-parenting and acting as friends. It’s not as though Paul would be technically cheating, but it would drive Tracy nuts since she hates mobsters and has particularly ill feelings towards Ava for taking Avery and letting AJ take the blame for Connie’s shooting.

Ava and Paul’s relationship wouldn’t start out as anything as casual as a dinner date, though. Look for it to spark with a steamy sex session then an acknowledgment that they need to keep this on the down low because he’s Port Charles’ top law enforcement official and she’s a renowned mobster. But all secret things in Port Charles eventually come out and this will too.

Either Morgan will drop by her place to talk and will see she and Paul sharing a goodbye kiss. Or Alexis Davis (Nancy Lee Grahn) and Julian Jerome (William deVry) could drop by with baby Leo and spot the same scenario. Alternately, Ava could drop by Paul’s office at city hall for a word and they’re spotted in an embrace – by Dante Falconeri (Dominic Zamprogna) or Jordan Ashford (Vinessa Antoine).

Either way, what starts as a private fling could turn into public news which would throw a kink into Paul’s plans for a secret Port Charles mob takeover. He’d have to lie and say he was “working” her for some information about the mob or another cover story. Ultimately, we know Paul is clever enough to have his cake and eat it too – which means he and Ava could keep on with their romantic romps.

This is a romance I’m excited about because it will stir up trouble in Port Charles, has chemistry, isn’t a weird May-December pairing, and actually makes sense. Both are romantically unencumbered so they wouldn’t be cheating. And dirty little secrets are always twice as sexy. Stay tuned to CDL for more on this and other hot plot twists coming to GH plus more “General Hospital” spoilers and news.