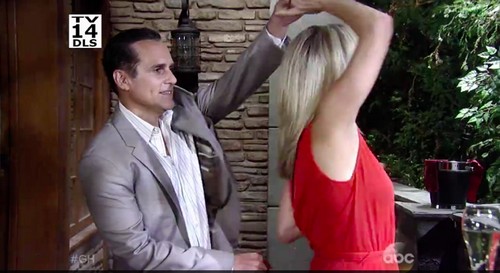 It’s mid-week and lots to see – check out these hot “General Hospital” spoilers for the Wednesday, July 15 episode of the hit ABC soap. Julian Jerome (William deVry) is happy to be back with Alexis Davis (Nancy Lee Grahn) but not so happy to find Franco (Roger Howarth) hanging out at his place. Julian wants to know what the hell he’s doing there and Franco will tell him he’s there to see Denise DeMuccio aka Ava Jerome (Maura West). Soon, Julian will lash out at Franco over the tragic “death” of his and Olivia Falconer’s (Lisa LoCicero) baby and could blame Franco for the loss and say that blackmailing her sent Olivia into an early labor.

But for now, Franco is there to plot with Ava. He’s ready to help her try to get baby Avery away from Sonny Corinthos (Maurice Benard). Ava plans to hit Sonny where it really hurts – his mob territory. But first they need some inside information to help with their planning. Franco decides the best place to find out what they need to know is from his dad Scotty Baldwin (Kin Shriner) since he knows Scotty has tons of info on Sonny based on all his investigations on the mob boss.

Meanwhile, newly-minted Police Commissioner Jordan Ashford (Vinessa Antoine) approaches Scotty about teaming up behind the scenes to focus on taking down Sonny at all costs. Scotty will be thrilled to have an ally at the PCPD to share his hatred of Sonny and his desire to take down the “Teflon Don.” Scotty will agree to the deal while also helping out Franco. This means that Sonny will be attacked on two fronts – one from law enforcement, one from another mob force – and both will surprise him.

Oblivious that his world is about to come crashing down, Sonny happily spends time with Carly Corinthos (Laura Wright) and baby Avery. He wants this for good and so Sonny proposes to Carly. She’s thrilled and ready to retie the knot with Sonny, but not happy when she finds out he’s getting more deeply involved in mob activities. Carly will also be shocked to learn that Josslyn Jacks’ (Hannah Nordberg) kidney donor Jake Spencer (James Nigbor) is alive and well.

Kiki Jerome (Hayley Erin) decides to try and do her Aunt Denise a solid and goes to ask Michael Quartermaine (Chad Duell) to talk to Sonny about letting Denise seeing Avery. Sonny shuts this down fast and completely – he doesn’t want Denise near his baby daughter and even Michael can’t get him to change his mind. Then Kiki’s dad Silas Clay (Michael Easton) confronts Morgan Corinthos (Bryan Craig) about his cheating on Kiki with Denise.

This upsets Morgan plus he’ll be further upset when he hears that Denise turned to Silas for comfort when she found out that Sonny again said no to visitation. Morgan will go to talk to Denise while he’s crazed with jealousy over the idea she might be connecting with Silas like Kiki had hoped for – and they will end up getting intimate. So ironically, it was Silas’ confrontation with Morgan about cheating that could end up causing the cheating to actually happen.

Finally, rat fink Ric Lansing (Rick Hearst) puts his evil plan into effect. Ric begins trying to drive his wife Nina Clay (Michelle Stafford) crazy by making her believe she’s hallucinating. Ric is ready to pull out all the stops to drive his wife over the brink into madness so he can remand her to Shadybrook and run wild with her money and her evil mother Madeline Reeves (Donna Mills). You’re pretty bad when a serial killer looks like a great catch compared to you!

Don’t miss a moment of Wednesday’s show then come back to CDL for more “General Hospital” spoilers, news and gossip!