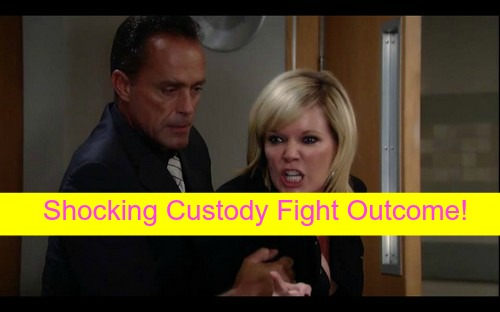 Check out these “General Hospital” (GH) spoilers for what we can expect to see in court and who will walk away victorious. This week, the big action in Port Charles is the Jake reveal, but next week the custody battle over baby Avery heats up.

What’s interesting about this custody battle is that each side is on equal standing with the other, but neither can seem to acknowledge it. Think about it for a minute.

Ava Jerome (Maura West) is a cold-blooded killer and so is Sonny Corinthos (Maurice Benard). Both have older children they have been estranged from them due to their poor parenting – Kiki Jerome (Hayley Erin) for Ava because of her lies and Michael Quartermaine (Chad Duell) for Sonny because he shot Michael’s bio-dad. Both are mob bosses, cheaters, and power-hungry criminals.

Both Sonny and Ava have lawyers fighting for them, but who will prevail? Let’s take a look at their legal eagles. Ava has Scotty Baldwin (Kin Shriner) who seems thrilled to be out of public office and making the big bucks by engaging in shady practices.

Scotty is usually pretty cocky about his chances in court, but he is not foreseeing a victory in this case based on Sonny possibly getting sympathy for his paralysis and Ava being a recently reinstated mob boss.

Scotty will try and talk sense to Ava about working out a deal with Sonny that will keep this out of the judge’s hands but Ava doesn’t like the idea of letting Sonny get his paws on her daughter. Over on Team Corinthos, Sonny’s slimy brother rat fink Ric Lansing (Rick Hearst) is representing Sonny in this fight.

Ric thinks he’s got a way to nail Ava and get baby Avery back in Sonny’s hands. Trouble is, Ric is a big loser in general, so this may not work out.

Ric gets up to some shenanigans this week that will set Ava off and send her railing against Sonny. Wonder what dirty pool scheme Ric has come up with – all we know is that it’s not fair play and will provoke Ava.

But then, you have to remember that Ava has another ally in her corner – Paul Hornsby (Richard Burgi). After Ava rages to Paul about Ric and Sonny playing foul, he’ll offer her a dirty strategy of her own to try.

Paul will advise Ava to provoke Sonny while in court to make him look like a violent criminal who doesn’t deserve to have his daughter. Ava will take Paul’s advice and turn the tables on Sonny and Ric.

The result is that Paul’s strategy will work like an evil voodoo charm and Sonny will go off in court which could give Ava the edge she needs to prevail in the custody case. There are also some “General Hospital” rumors kicking around that Kiki might testify.

Kiki is annoyed that Morgan Corinthos (Bryan Craig) slept with Darby Colette (Jesica Ahlberg) and if Morgan comes at her angry because he figures out she’s the one who ran his mom Carly Corinthos (Laura Wright) off the road, Kiki may lash out at the Corinthos clan by vouching for Ava.

This rumor seems like a stretch, but you never know… The big news is that it will be Paul that will help Ava prevail and this will get her in deeper with the newest bad guy in PC.

Stay tuned to CDL for more on the custody battle, Jake reveal and all the big “General Hospital” spoilers you need.