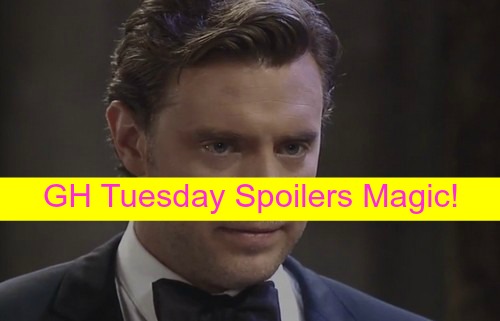 These “General Hospital” (GH) spoilers will get you hyped up for the Tuesday, November 3 episode. Jake’s identity confirmed, Dante dumped, Carly in peril – all this on Tuesday’s show.

Starting at The Haunted Star, all hell is breaking loose. Lulu Spencer (Emme Rylan) just found out she’s been played for a fool by her husband and cousin for months now. She stomps out and Dante Falconeri (Dominic Zamprogna) follows her onto the docks. Big mistake – he should have let her walk it off. Lulu is furious and unloads on her husband with both barrels. It starts with a slap but doesn’t end there.

Lulu is so mad she can’t see straight. Dante broke her trust just when she was ready to finally carry their baby and have all of the things she wanted in life. Lulu will tell Dante they are done, but will she do something next that she can’t take back? Will Lulu hook up with Dillon Quartermaine (Robert Palmer Watkins) or do something equally destructive? For now, Dante gets dumped and will be devastated.

Also at the HS, Valerie Spencer (Brytni Sarpi) confronts Dillon on how he could let his intern Andy Plummer (Scott Cooper Ryan) film her confession. Val wants Andy fired for showing the footage but then when Dillon pulls a face, she knows it was Dillon that swapped the sizzle reel with the confession tape. Valerie will unleash on Dillon over him publicly humiliating her, Dante and, of course, Lulu.

Nathan West (Ryan Paevey) cleared out most of the party by playing bad cop, but Kiki Jerome (Hayley Erin) is still lurking around being drunk and creepy. She wants to know where Morgan Corinthos (Bryan Craig) wandered off to, then is stunned when Darby Colette (Jesica Ahlberg) reveals she and Morgan were hooking up. Kiki goes off on Morgan and says he broke her heart again.

Is it me, or are Kiki’s mood swings reaching bipolar proportions? I thought Morgan was the crazy one… Kiki says Morgan broke her heart again and then she stalks out drunk with car keys in hand. Is Nathan not checking for drunks when he shuts down the event? Kiki will do something really stupid that’s more outrageous than any of her other antics. Will she drive drunk?

In one of the staterooms on the Haunted Star, Maxie Jones (Kirsten Storms) will rail on her BF Nathan for keeping Dante’s dirty cheating secret for so long. She’s furious that Nathan didn’t trust her enough to tell her the truth. Things have been so good lately for Maxie and Nathan, but she will see this as a major betrayal and it could put their relationship on the rocks as well!

Jake Doe (Billy Miller) and Liz Webber (Rebecca Herbst) are also down at the docks and Jake reveals that he’s having some sort of memory flash. Are they on the same pier where Jason “died”? Is he seeing the night he was shot? Of course, Liz will do whatever she can to minimize what he’s recalling and misdirect his attention back to her and their wedding and away from his former life.

Over at the Drake house, Sam Morgan (Kelly Monaco) is beating herself up that she couldn’t crack Jake’s identity before his wedding. Patrick Drake (Jason Thompson) reminds her that she worked hard and did her best. Later, Sam and Patrick will hang with their kids and enjoy what they don’t know yet will be one of their last happy times together before they get devastating news at the wedding.

Carly Corinthos (Laura Wright) used the water bottle as a ruse to get a DNA sample from Jake. She runs it over to the lab – wonder who they’ll match it against? Then Carly will get confirmation that the DNA is a match and that Jake is Jason Morgan and will go racing off to tell Jake that he can’t get married, but Carly will end up in danger instead. Is it possible that a drunk Kiki could run Carly off the road?

When you look at the wedding day “General Hospital” spoilers video that ABC released today, you’ll notice that Carly is in the same outfit she had on at the hospital – even though it’s a day later – and she’s got a bloody bandage stuck to her head and she looks very banged up. That screams car wreck and Franco (Roger Howarth) made a big deal of taking Kiki’s keys which she later stole back.

There is so much going on every day this week – don’t miss a moment – then check back with CDL for detailed daily “General Hospital” spoilers for the next day’s show and what’s coming for Liz, Jake, Sam, Patrick and the rest of Port Charles!