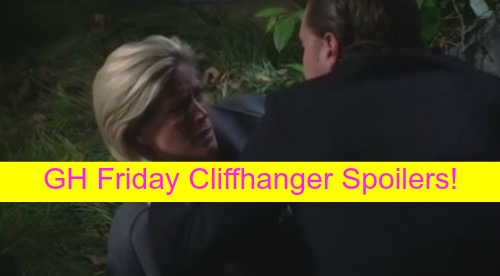 These “General Hospital” (GH) spoilers for Friday November 6 will get you ready for the Liz and Jake wedding and more. Cliffhanger Friday is upon us, but don’t expect satisfaction on the ‘Jake is Jason’ reveal on the November 6 show.

Liz Webber (Rebecca Herbst) is in her pretty white dress and all ready to get hitched to the love of her life, but things are not going to go as she wants. Hayden Barnes (Rebecca Budig) will do a scarier version of what Laura Spencer (Genie Francis) already tried – she’ll tell Liz that she knows the Jake Doe (Billy Miller) secret and that things are not going to work out for her like she wants once the truth comes out.

Lucky for Liz, Nikolas Cassadine (Tyler Christopher) noticed Hayden had wandered off and knows she’s gone to make trouble. No doubt Hayden will make some excuse about wanting to wish the bride “luck” and she’ll leave Nik to talk with Liz. Nikolas will reassure Liz that neither Hayden nor his mother will ruin her big day and that she’s going to get what she deserves – oh boy, will she!

At what point will Liz notice her handsome groom is nowhere to be seen? Of course, Jake is with his BFF Carly Corinthos (Laura Wright) who has gotten herself into yet another car accident.

Side note, Laura Wright was live tweeting today and a fan asked “why is it always a car wreck?” Wright responded “Carly is a bad driver,” No doubt. Jake finds Carly bleeding from a head wound and is worried for her.

He’s doubly worried since Carly called him Jason and Jake thinks that Carly has accident trauma befuddling her brain. Jake flat out tells her she needs to let her bestie go since he’s long dead. Carly will insist that he is Jason but Jake won’t believe it until Carly crawls back to the car and pulls out the DNA report – hope her car doesn’t set on fire and destroy the evidence it since it’s been smoking since the crash.

Carly will convince Jake 100% that he is Jason and it looks like he’ll know this by the time they get to the church. We all saw the #JasonRevealed video that GH released, but it’s highly doubtful that all the action we saw will come out on Friday.

Look for the wedding to spread over onto Monday’s show and leave us hanging. It is Cliffhanger Friday, after all. Let’s hope we at least get to hear Jake tell everyone he’s Jason.

While Jake is already on the hunt for Carly, Sonny Corinthos (Maurice Benard) has just noticed his wife is missing. Ric Lansing (Rick Hearst) doesn’t really give a damn, but Carly’s brother Lucas Jones (Ryan Carnes) is there and he does care.

Sonny is worried but can’t go looking for her – the man can’t even walk for God’s sakes… When will Jake call and let people know she’s okay?

Back at the church, Hayden tells Patrick Drake (Jason Thompson) that she’s getting her memories back. Good for her, bad for everyone else.

Also, are Patrick and Sam Morgan (Kelly Monaco) secretly married or not? “General Hospital” spoilers have hinted for weeks that the two tied the knot but, on today’s show, Patrick talked about them choosing a date once this wedding is done.

But that could be a misdirection from the writers – SamTrick could be planning a formal ceremony after an elopement they’ve already done. Hmm…

We also know Monday is still a wedding day carryover since the custody hearing is also on the wedding day, but in the afternoon. This slow pacing is insane – how will they catch up when the wedding is done? Will we fast forward through a week as soon as this is over?

Monday we should see the rest of the wedding as well as the custody hearing and the custody battle is going to be U-G-L-Y!

Ava Jerome (Maura West) is furious that Sonny had the hearing moved up to try and knock her off guard. It worked. Ava rants to Scotty Baldwin (Kin Shriner) that he’s not doing enough then she’ll run to the most powerful man she knows – Paul Hornsby (Richard Burgi). Lucky for her, Paul is cunning and will help her come up with a plan to knock Sonny back and keep baby Avery with her.

Paul advises Ava to push Sonny’s buttons as hard as she can at the hearing and she will. Looks like Sonny will explode which will make him look like the violent killer that he is. But how will Ava do this?

The fastest way to drive Sonny nuts would be to talk about how she brutally gunned down Connie Falconeri. Of course, Ava could also talk about how hot his son Morgan Corinthos (Bryan Craig) is in bed.

Also on Friday, we’ll get to see the latest addition to the Port Charles character tapestry – Dr Andre Maddox (Anthony Montgomery) – the new psychiatrist at GH. Dr Kevin Collins (Jon Lindstrom) brings Anna Devane (Finola Hughes) around to see his replacement so she can get started with her therapy and exorcise that Carlos Rivera (Jeffrey Vincent Parise) ghost that’s haunting her.

All this and more on Friday’s big cliffhanger show. Watch then come back to CDL for more “General Hospital” spoilers for Monday’s shocking episode and a look ahead at all of next week’s actions.