General Hospital (GH) Spoilers: Carly Pushes Jason Back Into Mob Life With Sonny – Will She Lose Him for Good? 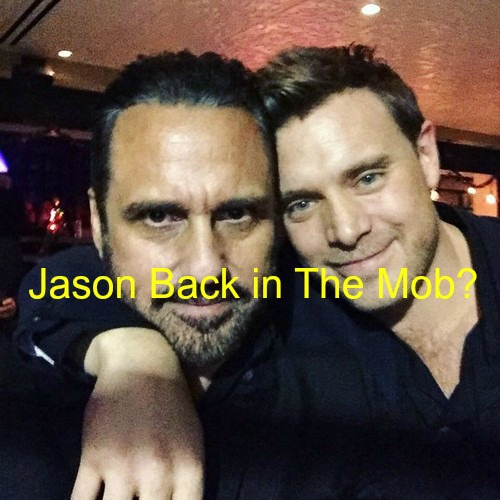 “General Hospital” (GH) spoilers indicate that Carly Corinthos (Laura Wright) has serious BFF goals for 2016. She wants Jason Morgan (Billy Miller) back in his old position as enforcer for Sonny Corinthos (Maurice Benard) and as her partner-in-crime as well.

For all of Carly’s heated attacks on Liz Webber (Rebecca Herbst) about keeping Jason’s identity secret because of her agenda, Carly has a major agenda of her own. Liz already called her out on it, but that won’t stop Carly.

Remember when Carly confronted Liz – yet again – over at GH? Liz pushed back on Carly saying she wanted Jason back with her and Sonny as part of their “weird chaste ménage à trois” and Liz was spot on with this accusation.

That’s exactly what Carly wants and she’s going to push to get just that from Jason. But Carly doesn’t really know this new Jason as well as she thinks and is overestimating her ability to manipulate him the way she did old Jason.

Now that Sonny is in the wheelchair and doesn’t look to be coming out soon, Carly would feel better knowing that Jason has his back and is protecting him like he once did. However, Jason has no interest in being involved in criminal endeavors.

You’ll recall that Jason just told Damien Spinelli (Bradford Anderson) that he didn’t see the upside to helping keep a mobster in business even though Spinelli insisted Jason was honorable and mostly used his lethal skills for good.

Even if Jason recovers his memories, he can no longer stomach a life of violence. The havoc he can wreak with his hands sickens him. Why would Jason ever go back to mob life? This issue may be a breaking point for Jason when it comes to Carly and Sonny.

Jason doesn’t want to be a criminal – period – and he doesn’t like being put in the position of having to engage in criminal activities. The closer he gets to Sonny, the more likely it is that he’ll resort to violence to save Sonny – as he’s done in the recent past and in the years he can’t remember.

That means no matter how much Jason may like the personal side of Sonny, he will want to avoid anything to do with Sonny’s business – and that means avoiding Sonny since it all leaks over into his personal life.

Jason also doesn’t know the extent of Carly’s corrupt sensibilities. Over the years, old Jason forgave her and helped cover up a litany of lies, schemes and crimes. But he’s not that guy anymore. And no matter how bad Carly wants him to be, Jason will refuse.

GH spoilers direct from Nathan Varni reveal that, at some point in coming months, Jason will recover all of his memories. But rather than bringing him back to the man he was – the stone cold hit man – these recollections could push Jason farther away from Carly and Sonny.

Simply, Jason wants to be someone better than he was. And with Carly and Sonny wanting him to be exactly who he was, that’s a major disconnect. Carly is not known for her subtlety and as she continues to pressure Jason to be who she wants, he will push back hard.

Carly has a day of reckoning coming where she realizes Jason is not someone she can manipulate or bend to her will anymore – and he’s not going to be her sidekick. He wants more with this new shot at life and GH spoilers indicate Jason will walk away from the pressure.

Carly will have to be the one to bend this time and accommodate Jason’s changed outlook and hopes for his life – or lose him for good. What do you think GH fans, will Carly alienate Jason with her pushy insistence that he be the man she wants?

And will Carly’s conflict with Jason ruin any shot that Sonny has to get his BFF back? Should Jason walk away from Sonny and Carly for his own peace of mind and to keep his kids safe? Or does he owe them any loyalty?

Share your thoughts in the comments below and come back to CDL often for tons more “General Hospital” spoilers and news.