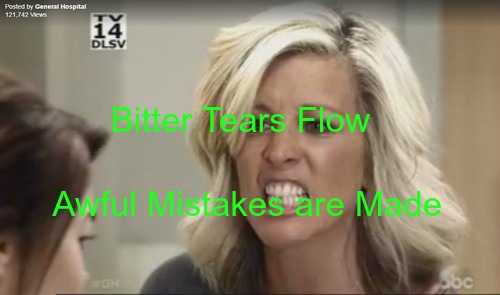 “General Hospital” (GH) spoilers indicate that Dante Falconeri (Dominic Zamprogna) has buyer’s remorse about his new relationship with Valerie Spencer (Brytni Sarpi). He questions how he let his life get this screwed up and goes to see his dad.

Dante confesses to Sonny Corinthos (Maurice Benard) about the mess his life is in – the separation, Valerie, Lulu Spencer’s (Emme Rylan) refusal to talk to him. Dante is frustrated because he wanted to make nice with Lulu but she iced him out.

Sonny should be a wealth of wisdom on this topic since he’s cheated on so many women yet managed to get them to take him back again and again. Dante may be losing interest in Valerie, but Johnny Zacchara (Brandon Barash) is hot on her trail.

Looks like Johnny messed with Val’s car so she’d break down and he could be her white knight. Johnny will find out what Valerie’s weaknesses are during this exchange so he can better exploit them. Will Valerie fall prey to Johnny’s handsome wiles?

Johnny already commented on how gorgeous Valerie is – any chance there for real romance? Dante might not be so fast to cast Valerie aside if he knew she was into someone else. And Lulu might get intimate with Johnny out of jealousy over Val…

Lulu meanwhile has a sit down with her mom Laura Spencer (Genie Francis) who asks what Dante has done now since Lulu is obviously fuming. She tells her mom about Valerie spending time with Rocco and Laura senses that Lulu is about to go cray cray and tries to talk her down.

It won’t work. Lulu is off the rails and lashing out. Also lashing out is Carly Corinthos (Laura Wright) who calls Liz Webber (Rebecca Herbst) out at her place of work and gives her a verbal dressing down in the halls of GH.

Carly really unloads on what a terrible person Liz is and how glad she is that the truth is out, and Jason Morgan (Billy Miller) can see what a lying tramp she is – you know, the usual Carly feel-good holiday greeting.

It’s a whole load of wacko she dumps on Liz – not that Liz doesn’t deserve to pay for her lies, but still… Franco (Roger Howarth) eavesdrops and hears the public shaming then offers Liz some counsel on how to deal with being universally despised.

Franco is a good case study since he was a serial killer and is now, for the most part, accepted in the fabric of Port Charles society – Carly notwithstanding. Is this the beginning of a new social network for Liz? Nina Clay (Michelle Stafford) also won’t care what Liz is done. Interesting…

And Nina will need some friends – she has no clue that Julian Jerome (William deVry) has set her up for failure – handing her the reins at Crimson so she can crash it and he can get a fat tax write off. Poor girl can’t catch a break.

Julian is devilishly gleeful as he tells Alexis Davis (Nancy Lee Grahn) that it won’t be long now before Crimson fails. Too bad Franco is suspicious. Franco tries to warn Nina about Julian’s shady tactics, but she won’t listen and if he presses, he’ll upset her.

Instead, Franco will test Julian to see what he’s really up to. That can’t go badly, right? Over at the Crimson offices, Maxie Jones (Kirsten Storms) has an intriguing proposition for Dillon Quartermaine (Robert Palmer Watkins).

As part of the plan to turn Crimson around, Maxie and Nina want a social media splash and Maxie thinks Dillon is the perfect man for the job. How can he refuse? After all, Lulu is single now so he wants to stick around Port Charles for a while. 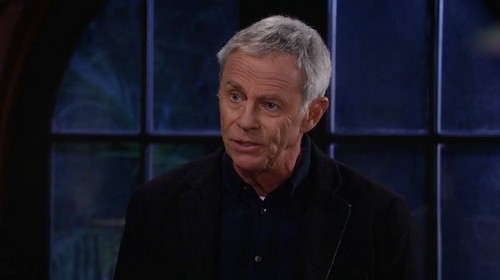 Later this week, Robert Scorpio (Tristan Rogers) is back on the scene working closely with Anna Devane (Finola Hughes) to rescue their daughter Robin Scorpio (Kimberly McCullough). Until then, Anna is focused on finding out all of Paul Hornsby’s (Richard Burgi) dirty secrets.

Don’t miss a moment of the Tuesday December 15 episode then check back with CDL for more “General Hospital” spoilers, gossip and more.