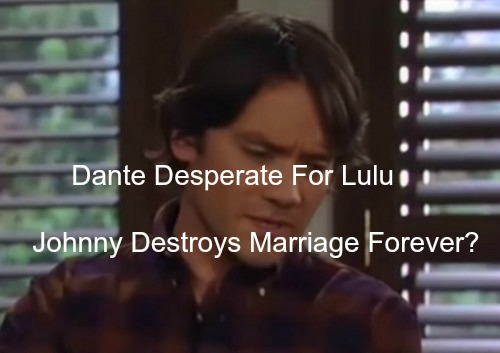 “General Hospital” (GH) spoilers reveal that Dante Falconeri (Dominic Zamprogna) may finally be ready to admit that he’s botched his marriage to Lulu Spencer (Emme Rylan) and try to make things right. But Johnny Zacchara (Brandon Barash) may end their marriage for good.

Many fans have noted that Dante’s actions seem out of character and he jumped to the conclusion too quickly that Lulu was cheating with Dillon Quartermaine (Robert Palmer Watkins) then hopped into bed with Valerie Spencer (Brytni Sarpi) way too fast.

If Lulu and Dante had been left alone to sort things out, they likely could have pieced their marriage back together sooner. But Valerie’s relentless presence – as well as Dillon pulling from the other side – have rendered them asunder. Can they be fixed?

Dante agreeing to a public date with Valerie seemed like jumping the gun, despite the separation papers being signed. And when he went all in when Valerie offered him an out, it seemed like things were getting out of control.

Is Dante the kind of guy that just can’t be without a woman? If he can’t have Lulu, is Valerie just a fill-in because he needs a chick in his life? Olivia Falconeri (Lisa LoCicero) wrote Dante a reality check he couldn’t ignore and once her words sunk in, so did the regret.

Dante questioned how deep he’d gotten in with another woman and how far his marriage was off tracks. GH spoilers indicate that Dante is ready to try and work things out with Lulu and will suggest they talk about a possible reconciliation.

That all sounds great, except that Lulu has made a deal with a handsome devil – Johnny Z. Growing up a Spencer, Lulu has a distinct lack of respect for the law, so sending a known hitman and murderer after her romantic rival seems a fine idea.

Johnny has promised to make Valerie “go away” but exactly what does that mean? Has Lulu agreed to a murder plot? In the week of December 14 thru 18, Valerie will find herself in a scary situation and Johnny will come to her “rescue.”

What’s probable is that Johnny set up the dangerous situation and, of course, Valerie has no idea who Johnny is and just how dangerous he can be. The incident with Johnny will give him some insight on Valerie that will fuel his plot with Lulu to target Dante’s new squeeze.

Dante has the best intentions in the world, but when he finds out that Lulu has been hiding Johnny on The Haunted Star, he will be livid. Worse yet, when he finds out Lulu sent Johnny after Valerie, he may assume the worst – that Johnny intended to “off” Val.

Will Dante slap cuffs on his estranged wife and her mob buddy? At the very least, this discovery will derail any intention Dante had of reuniting with his wife. Dante’s urge is to protect and if he has to shield Valerie from Lulu and Johnny, it could cement their new romance.

Lulu doesn’t seem to care that she’s potentially putting Valerie’s life at risk – she thinks that “bitch” stole her life and that means all bets are off. Johnny doesn’t play. He kills people without a thought. If he thinks he’s doing Lulu a service by shoving Valerie off the pier, he might just do it.

If Lulu ends up jailed for aiding a known criminal and conspiring to commit violence against Valerie, she could lose Rocco to Dante for good – and could ensure that their divorce becomes a reality. Is that what Lulu deserves by bringing Johnny into her revenge plot?

Will Johnny hurt Valerie? How long will it take before Dante realizes that Lulu is consorting with Johnny? Will Dillon blab the news to Dante that Johnny is back in town if he sees Johnny with Valerie? Could Lulu’s ex Dillon be the one that rats her out to her soon-to-be-ex hubby?

Don’t miss a moment of GH and check back with CDL often for more “General Hospital” spoilers, gossip and more.