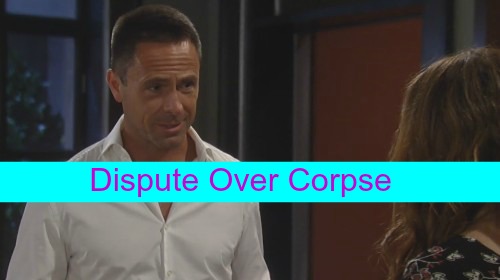 These General Hospital spoilers will get you ready for the October 20 show with action on Sonny, Dante, Olivia, Carly, Alexis, Julian and much more! Mostly medical, mob and baby events and news on Tuesday’s GH.  Baby stuff first…

Olivia Falconeri (Lisa LoCicero) got unceremoniously dumped by Ned Ashton (Wally Kurth) over her baby lie to Julian Jerome (William deVry). Well played by the new writers – it gets Ned off the page in Port Charles, out on tour with Brook Lynn, but leaves the door open for Ned to return at a later date.

A devastated Olivia runs to other son Dante Falconeri (Dominic Zamprogna) to tell him about Ned kicking her to the curb. Dante listens to her bad news then offers some good news to counter it.

Dante tells his mom that he and Lulu Spencer (Emme Rylan) are moving forward with their plans to implant their last embryo. Of course, there’s still the whole cheating issue – will Dante tell his mom about his marital faux pas?

Plus the last time anyone had their hands on that embryo, it was the Cassadines and Liesl Obrecht (Kathleen Gati). Do you think they didn’t tamper with it somehow? Come on… Lulu could be getting implanted with just about anything thanks to those crazies.

Sonny Corinthos (Maurice Benard) overhears someone talking about his medical condition. Likely it’s Carly Corinthos (Laura Wright) speaking with Patrick Drake (Jason Thompson). Carly tells Patrick she and Sonny are wed (yet again) and Patrick may tell her she should have waited to find out more about Sonny’s prognosis which is looking grim.

Something bad has finally stuck to the Teflon Don – looks like he may be in that wheelchair for some time and will need a major medical intervention.

Also at GH for a doctor visit is Anna Devane (Finola Hughes). She’s got a session with Dr Kevin Collins (Jon Lindstrom) for her stress and anxiety. Since Anna knows there’s doctor/patient confidentiality for any past crimes – just not any future ones – she may decide to unburden herself to the shrink so she can air out her issues and have someone to talk to honestly about her situation.

Sonny calls in Max Giambetti (Dirk Cheetwood) for a sit-down about his shooting and the death of Carlos Rivera (Jeffrey Vincent Parise). Sonny wants to know who shot Carlos but Max will have no answers for his boss. All they know is that Carlos’ body has been found (except it’s not really Carlos) and that the Jeromes claimed Carlos was acting as a “rogue” operative and not under orders from any of the Jeromes. None of this adds up, of course, because of Paul Hornsby’s (Richard Burgi) schemes.

Alexis Davis (Nancy Lee Grahn) is worried that Julian was on a mob call, but her fears are unfounded. Julian is out of the Jerome organization – at least for now – her honey bunny was orchestrating a surprise for her.

Is he buying something for the apartment now that he and Alexis are cohabitating? Or could it be a ring? Brad Cooper (Parry Shen) also has mob concerns and consults with Alexis for legal advice about whether he can get out of his marriage with Rosalie Martinez (Linda Elena Tovar).

Julian thinks that Brad is playing fast and loose with his son Lucas Jones (Ryan Carnes). Julian wants Lucas to be careful with his heart, but Lucas has faith in Brad. Dillon Quartermaine (Robert Palmer Watkins) rants to Lulu that Dante doesn’t deserve her. He is not going to give up and let her stay with who he thinks is the bad guy. But is Dillon ready to tell her Dante’s big bad Valerie Spencer (Brytni Sarpi) secret? Looks like he’ll stay mum for now.

And the romance on Dillon’s movie between the two leading character has some hiccups – as does the movie shoot. Maxie Jones (Kirsten Storms) to the rescue! Maxie offers Dillon some advice on how to make the low-budget film much better. Whatever criticism you have about Maxie, she sure is creative and her ideas may be just the super-charge that Dillon’s film project will need. But will Dillon prodding Lulu get them kicked off the Haunted Star?

Don’t miss a moment of Tuesday’s show then come back to CDL for a detailed “General Hospital” spoilers of the next day’s show plus gossip and more!