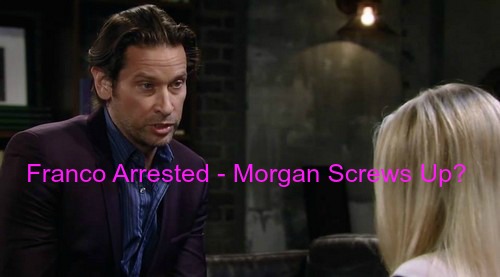 “General Hospital” spoilers (GH) indicate that Kiki’s antics have the potential to ruin several lives. Kiki is off the rails – and we get why. First, it’s a miracle that Carly Corinthos (Laura Wright) survived Kiki Jerome’s (Hayley Erin) drunk driving escapade considering how sloshed Kiki was and how prone Carly is to “dying” in car accidents. But Carly survived so it looks like it’s all over and done, right? Wrong!

Nathan West (Ryan Paevey) investigated Carly’s hit and run and the results could be problematic for Nathan’s sister Nina Clay (Michelle Stafford). Nathan just arrested Nina’s honey Franco (Roger Howarth) for the hit and run. Poor Franco has no clue why he’s being cuffed especially after he just got a clean bill of mental health (sort of) from Dr Andre Maddox (Anthony Montgomery).

Last Franco knew, he took the keys from Kiki and didn’t suspect that she swiped them back. Poor Franco assumed an annoying neighbor hit him in the parking garage. He was irritated and rushed the repairs so he wasn’t driving a banged up car. And that impatience to have his car restored is what will make Franco the likely suspect in the hit and run. His car matched the damage and then had hasty repairs.

Is there evidence, though, to exonerate Franco? Does their garage have security cameras that could show Morgan Corinthos (Bryan Craig) parking the banged up car which would implicate Morgan and clear Franco? Once Franco hears that his car is suspected to be part of a hit and run involving Carly, he’ll do the math and quickly figure out that Kiki was driving drunk, but what then?

Franco feels terrible that Kiki has lost her father, is estranged from her mother, and has only him looking out for her. So it’s likely Franco will continue to do so and he may even confess to the crime – or at least not protest his innocence. And even if he doesn’t confess, Franco could still be implicated if Morgan makes false statements to exonerate Kiki.

We know Morgan can’t stand Franco and would do anything to protect Kiki. Plus we saw Morgan lie on the stand in court cases before, so fibbing to the cops is right in his wheelhouse. And since Morgan saw Franco arrested, he has a head start to run to Kiki and try to get their stories straight. Nathan may feel bad about running in Nina’s boyfriend but he also knows just how much Franco hates Carly.

But why would Franco go after Carly after all this time? Franco has Nina now who is wealthy, beautiful and totally into him. Plus Nina’s ex-husband is dead, so Franco doesn’t have to worry about Nina cheating like Carly did. So why would Franco mess all this up to hurt Carly? He wouldn’t. But will the brainiacs at the PCPD be able to figure that out?

And will Nina offer an alibi that will satisfy the cops? Since she and Franco aren’t sharing a bed (yet) she can’t testify where he was all night that night… Unless she lies too! And let’s remember, Kiki could shut all of this down by just confessing that she was the culprit, but it’s likely Morgan will be in her ear telling her not to do it.

Morgan will tell her that her life has been rough enough and Franco can do the time for this since he escaped justice for all of the murders he committed and it won’t be a big prison sentence – probably just a few months or maybe even just probation if he has a good lawyer. When the heat turns up, Morgan will try to talk Kiki into running away with him.

“General Hospital” rumors indicate that Morgan hatches a skip-town plan with Kiki soon and the arrest will be the motivating factor behind this scheme. But it’s time for Kiki to clean up her act, starting with coming clean about her irresponsible DUI shenanigans. Let’s hope that Kiki does the right thing and doesn’t listen to increasingly erratic Morgan.

Stay tuned to CDL for more on the hit and run storyline and other “General Hospital” spoilers, gossip and more.