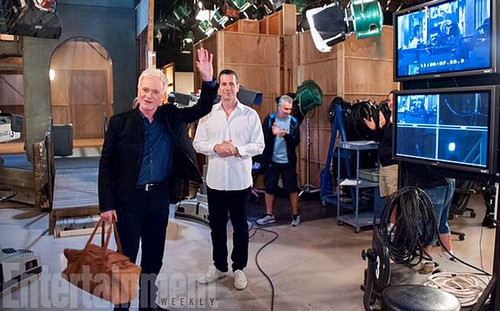 What’s up with Lucky’s kidnapping bait and switch? Find out more in these “General Hospital” spoilers for the Thursday June 25 episode of the hit ABC soap. First over at ELQ, Nikolas Cassadine (Tyler Christopher) isn’t done wreaking havoc. Now that Nik has won the vote to retain his voting rights, he has his sights set on the CEO chair. Will Nik win this vote too or will Michael Quartermaine (Chad Duell) be able to hold him off? Tracy Quartermaine (Jane Elliot) won’t take this sitting down and Lucy Coe (Lynn Herring) may or may not side with Nikolas on this vote. Wouldn’t it be fun if Nik and Mikey end up as co-CEO’s?

Nikolas also has to deal with the issue of possible jail time since Rosalie Martinez (Linda Elena Tovar) ratted him to the caps. Nik will flat out tell Rosalie to recant or else. Rosalie will do what he asks because her dirty little secret is really a dirty big secret. Rosalie likely won’t actually do any time for the ELQ shenanigans, but she’ll face it rather than see Nikolas air her dirty laundry. And speaking of dirty little secrets…

Morgan Corinthos (Bryan Craig) aggravates Dad Sonny Corinthos (Maurice Benard) by telling him that he almost hooked up with Denise DeMuccio (Maura West) on Mikey’s fancy CEO couch at ELQ. Sonny will go off and order Morgan to stay clear of that troublesome broad but, of course, Morgan will not and there’s a good chance those two will be doing the horizontal mambo within a week or so. Wouldn’t it be fun if Morgan knocks up Denise then we find out baby Avery is his kid too?

As mad as Sonny is at Morgan, the mobster will soon be feeling better if Sabrina Santiago (Teresa Castillo) gets her way. Sabrina proposes to Michael that now might be a good time to rebuild the relationship with his mom Carly Corinthos (Laura Wright) and dad Sonny. After all, the custody matter is settled and they’re letting him keep the baby in the deal to protect Morgan from prosecution for drugging Michael, so what’s to keep them estranged?

Sabrina tells Michael she thinks they should patch things up and he’ll be greeted with open arms because Sonny is feeling very protective over Michael what with the headline news that ELQ is facing takeover. Look for Michael to let Sonny have a visit with his daughter Avery which will instantly make things all better. And will TJ Ashford (Tequan Richmond) be around to see this? He’s the latest kid that Sonny is trying to adopt into his lifestyle despite Jordan Ashford’s (Vinessa Antoine) protests.

In other cop news, Dante Falconeri (Dominic Zamprogna) is broken-hearted that Lulu Spencer (Emme Rylan) has taken off to parts unknown with Dillon Quartermaine (Robert Palmer Watkins) while lying and telling him a sick grandma fib. Valerie Spencer (Brytni Sarpi) will comfort Dante who is hurting bad and there’s a good chance the two will, at a minimum, lock lips and maybe even more. Of course, once Lulu finds out, she may really stray with Dillon and her marriage will be in major trouble.

Speaking of marriage, things are not rosy in the new relationship between Ric Lansing (Rick Hearst) and Nina Clay (Michelle Stafford). Ric has big mother in law troubles with Madeline Reeves (Donna Mills). Madeline puts pressure on Ric to hurry up and get moving on the plan to rob Nina of her inheritance by getting her re-committed to Shady Brook. Nina is going to go off when she finds out about this and Franco (Roger Howarth) can’t wait to tell her.

Franco tells Nina that her mom is out of prison – will he drag Ric’s name into the discussion and sully it? When Nina doesn’t respond the way he wants and defends her marriage and total fink hubby Ric, Franco is ready for a more drastic plan to get her back. Fortunately for him, Denise is also ready for a drastic plan to keep her out of Morgan’s bed. Denise will tell Silas Clay (Michael Easton) that she has to take a major step to keep herself away from Morgan.

That major step will be starting up a little something with Franco. They both need a co-conspirator to help them deal with relationship issues and the two nut cases will find each other and start up a faux-mance that may turn into a real romance – or at least a really fun and interesting romance. Can’t wait – can’t wait another day to see Franco and Denise start teaming up to make trouble all over Port Charles!

And maybe we’ll get some answers tomorrow about Lucky Spencer’s (Jonathan Jackson) kidnapping. But more likely we’ll just be left with more questions as the Luke Spencer (Anthony Geary) swan song will drag out for a few more weeks. We’ll see Holly Sutton (Emma Samms) son and her son with Luke too – Ethan Lovett (Nathan Parsons). Lots more goodbye cameos to come, but “General Hospital” spoilers reveal that Robert Scorpio (Tristan Rogers) will not be among those stopping by.

Don’t miss a moment of GH then head back to CDL for lots more “General Hospital” spoilers, gossip and casting news.