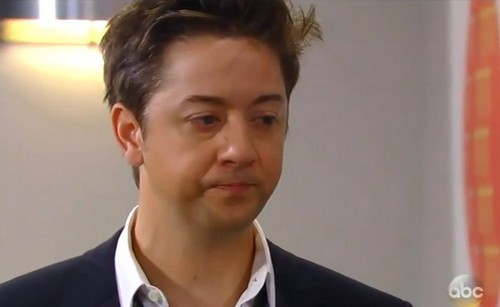 “General Hospital” spoilers and rumors have been teasing for weeks now that Bradford Anderson was returning to the ABC soap as Damian Spinelli, Port Charles’s resident computer hacker and Maxie Jones’s baby-daddy. Bradford Anderson hinted in interviews a few months ago that he was “itching to get back to work” on “General Hospital,” however TPTB at the soap were not confirming nor denying that he was returning. Now, we can officially confirm the casting spoilers – Spinelli is coming back, and this time he is staying!

“General Hospital” casting spoilers in the February 16 edition of Soap Opera Digest reveal, “Spinelli is making another comeback – and this time he will stick around for a while, Digest has learned. The Daytime Emmy-nominated Anderson was a consistent Port Charles presence from 2006-2013and put in several guest appearances in 2014.”

The last time we saw Spinelli was on New Years when Maxie Jones finally got visitation rights to visit their daughter Georgie in Portland. Maxie left early to head back to Port Charles to spend the holiday with her boyfriend Nathan West, however Nathan showed up in Portland to surprise Maxie – who was already gone. Nathan and Spinelli shared a few scenes and got to know each other while he was in town.

“General Hospital” spoilers tease that Maxie and Nathan’s relationship could be in danger this month, and the couple will endure their first major fight. Now that we know Bradford Anderson is returning as Spinelli – it’s safe to assume that their fight has to do with Maxies baby-daddy moving back to Port Charles. Maxie and Nathan’s relationship seems pretty solid, but with Maxie’s ex and the father of her child coming home, there could be some major drama in store for the popular GH couple.

So GH fans, how excited are you to have Damian Spinelli back – for good this time? Do you think that he will cause some problems for Maxie and Nathan? Would you like to see Georgie’s parents reunited, or do you think Maxie belongs with Nathan? Let us know what you think in the comments below and don’t forget to check CDL tomorrow for more “General Hospital” spoilers and news.