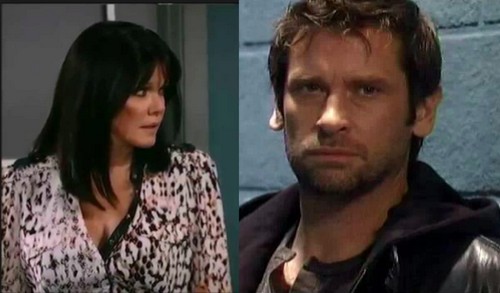 Here is a new “General Hospital” spoilers you need to know about the steamy hot love life of Ava Jerome aka Denise DeMuccio (Maura West). On Friday’s GH, we saw Denise and Morgan Corinthos (Bryan Craig) come within a hair’s breadth of getting naked and intimate on Michael Quartermaine’s (Chad Duell) office sofa. They were interrupted by corporate spy/secretary Rosalie Martinez (Linda Elena Tovar) and by the time they got zipped up and tucked back in, Kiki Jerome (Hayley Erin) was there too.

No matter how much Morgan and Denise want to get jiggy with each other, neither wants to hurt Kiki. Rosalie shouldn’t be a problem for now because she’s accustomed to trading in secrets, but Morgan and Denise need some external force to keep them in check. Since Silas Clay (Michael Easton) turned Ava down flat when she tried to use him as a sexual side dish to distract her from Morgan, someone else needs to intervene. Enter Franco (Roger Howarth).

Franco is having romantic issues of his own. His lady love Nina Clay (Michelle Stafford) went and got hitched to Port Charles’ leading rat Ric Lansing (Rick Hearst). It’s eating Franco up and since his Hail Mary pass with Nina’s little brother Nathan West (Ryan Paevey) flopped utterly when Nina dared them to lock her up for not kidnapping Avery, Franco needs a plan D (since plans A through C have failed).

Enter Ava/Denise. It’s kind of a match made in heaven (or the mid-levels of Hell) between Franco and Ava. They’re both killers, they’re both crazy and they’re both sexy in a dangerous way. And Franco and Ava’s entanglement will be sure to drive Nina and Morgan mad with jealousy. But while Franco and Denise’s romantic ploy starts out to be a lark to distract them from their other lovers and generate some envy, it may get more serious.

How much trouble would Port Charles be in if Franco and Denise team up to take over the Jerome mob territory? They both have the capacity to love deeply and to be deeply violent. Paired together, there’s no telling how far they would go. So the real question is, will Franco and Denise actually fall for each other while pretending to fall for each other? Will they end up in bed with one another for some crazy hot psycho sex?

Or will Nina and Morgan be so green eyed that they pursue Franco and Nina (separately of course) and then cheat with them? How enraged will Ric and Kiki be when they find out they’re being cheated on? Will Nina and Morgan decide they have to have Franco and Denise despite the cost to their current relationships? If things go the way the “General Hospital” rumors indicate, Franco and Nina will be hot and heavy and he’ll save her from Ric.

With Morgan and Denise, Morgan will realize she’s Ava and Denise/Ava will confess that Avery is really Morgan’s daughter and tell him she rigged the DNA results with Silas’ help to save her life from Sonny Corinthos (Maurice Benard). This will blow up many relationships, but should be a lot of fun to watch. And you have to wonder how Dr Obrecht (Kathleen Gati) will take the news that her darling Franco is getting spicy with Denise/Ava. Will she prefer Denise to Nina since we know Dr O doesn’t get that relationship?

Can’t wait! The Franco and Denise action will start next week and sparks will fly all over Port Charles once those two start hooking up. The reformed serial killer and resurrected mob vixen deserve a fitting couple name. What do you think? DeFranco? Avanco? Francise? Franca? No matter what they call it, it’s going to get wild. Silas may even regret not taking Ava up on her offer to get involved once he sees what she gets into with Franco. Fun!

Don’t miss a minute of GH then head back to CDL for tons more “General Hospital” spoilers, news and gossip.