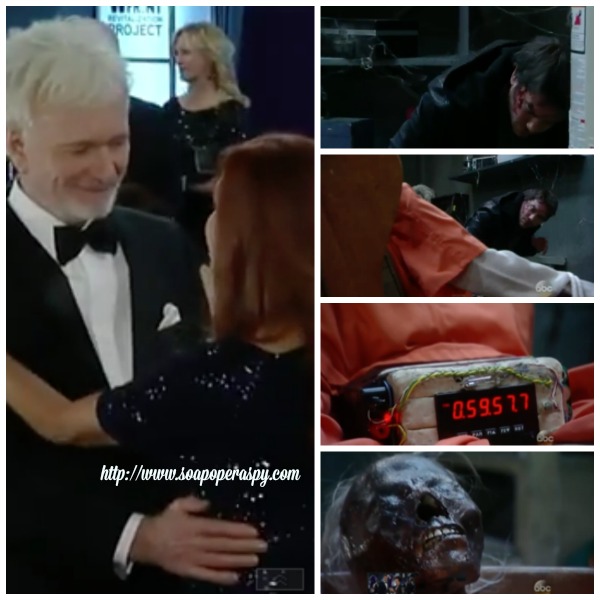 “General Hospital” spoilers have been teasing for months now that GH fans would finally find out the identity of Fluke, the Luke Spencer impostor, in February. The ABC soap’s producer and head writer Ron Carlivati took to Twitter and warned fans not to miss the episode of “General Hospital” airing on Friday January 30 because Fluke’s identity would finally be revealed. So, you can imagine everyone’s surprise when Dante looked at the chair where Luke Spencer has been tied up – and seen nothing but a decaying corpse, presumably that of Luke’s doppelganger Bill Eckert.

A popular Fluke Theory first espoused on CDL that gained a lot of momentum since we explained it was that Helena Cassadine had brainwashed Luke Spencer and had him under mind control – and Fluke was actually Luke Spencer and there was no impostor. As the impostor storyline picked up pace in 2015, the mind control theory seemed to come to fruition. If Fluke was really Luke Spencer, that explained why he was able to fool his own friends and family into believing he was actually Luke, because he was.

GH fans believed that there was no hostage tied up in the chair, and talking to Luke was all in Fluke’s mind – and seeing as how Dante found nothing but a skeleton tied in the chair on Friday January 30th, it all seems to be falling in to place. If Helena Cassadine was able to fool Jason Morgan in to freeing Faison and nearly taking out his own wife, then it stands to reason she could brainwash Luke Spencer as well. And, ironically Helena handled Fluke and talked to him the same way she does Jake.

However, “General Hospital” fans are in an uproar over the shocking Fluke reveal on Friday’s episode for the ABC soap. If the GH writers are going with the “Brainwashed By Helena” twist – then there are some major holes in their storyline and the following one appears to PROVE Fluke can’t be Luke!

A problem is that Julian told Alexis that he and Fluke constructed the Derek Wells Media story together. But at that time Connie was still alive having not yet been murdered by Ava (August 2013) which means that Luke Spencer has not yet been kidnapped! This is proof positive that according to GH itself, Julian had a relationship with Fluke BEFORE Luke could have been brainwashed! Does this mean that Luke can’t really be Fluke?

In the video of the episode of General Hospital from November 24, 2014 (below), Julian explains to Alexis how he met Fluke and Alexis comments it was, “A match made in heaven.” Julian replies, “I thought so at the time and that is when we created Wells Media as a cover but the main reason for it was we wanted to build the Jerome family back to something my father couldn’t imagine. We wanted to make sure the Jeromes were back on top. In order to do that we needed to take Port Charles away from Sonny.” Problem is that this conversation with Fluke related to Alexis by Julian occurs before Luke disappears and is brainwashed into thinking he is Fluke!

Either the writers are throwing GH fans yet another red herring about the identity of Fluke – or they have seriously underestimated the “General Hospital” fans and hoped they would just forget major inconsistencies in the storyline.

There is also the chance that the “General Hospital” writers didn’t actually know who Fluke was when they kicked off the big storyline, which is why the timeline makes absolutely no sense. Perhaps in the beginning they did plan to make Luke Spencer’s imposter Bill Eckert or Damian Smith, however GH fans figured it out so quickly that they decided to switch routes halfway through and go with the Helena Cassadine mind control twist.

What do you think GH fans? Did you feel robbed on Friday January 30th when they revealed that Luke Spencer was just an old corpse? Does that mean that Fluke is Luke Spencer under Helena’s mind control? Or is it just another red herring from the GH writers? How do you explain the timeline inconsistencies if Fluke is brainwashed? Let us know what you think in the comments below and don’t forget to check CDL tomorrow for more “General Hospital” spoilers and news.