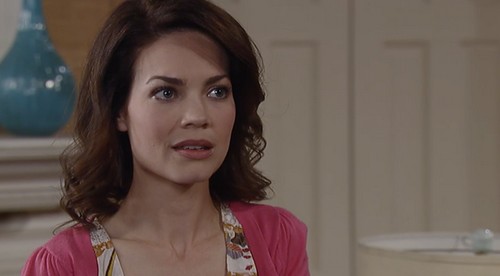 Hey GH superfans, check out these juicy “General Hospital” spoilers for your fave ABC soap for today Thursday, March 19. Today we’ll see that, in the wake of son Cameron Webber’s (Michael Leone) confession that he may have started the fire that scarred Spencer Cassadine (Nicolas Bechtel), Liz Webber (Rebecca Herbst) will be reeling. Sexy Jake Doe (Billy Miller) shows up and will comfort her. We’ve been waiting on these two to cut the sexual tension with a juicy kiss and “General Hospital” spoilers indicate that we’ll see the big lip lock today finally! But it won’t last long because they’ll be interrupted. Will it be Jake’s fake wife that Ric Lansing (Rick Hearst) has invented or some other unwelcome interloper? Either way, Liz and Jake are not going to get the intimacy they’re hoping for…

Yesterday, we saw an upset Nathan West (Ryan Paevey) head over to the gym after Maxie Jones (Kirsten Storms) admitted she loves both he and baby daddy Damien Spinelli (Bradford Anderson). And of course The Jackal was already (improbably) at the gym bemoaning his lack of abs to mentor Sorry Corinthos (Maurice Benard). Today, according to “General Hospital” gossip, Nathan will tell Damien in no uncertain terms to pack his hacker butt back off to Portland. This will be about all the pushing that Spinelli is prepared to take from the brawny cop and he’ll throw down the metaphorical gauntlet and (foolishly) challenge Nathan to a duel.

Needless to say, this won’t end well for Damien – or will it? Because while the macho posturing is going on over at the boxing gym, Maxie has run to Lulu Falconeri (Emme Rylan) to tell her that she loves both The Jackal and the sexy cop and she’s not sure who she wants. Lulu will talk through things with her, but in the end, Maxie will have to make up her own mind. She’ll show up to the gym in time to see Nathan give Spinelli an epic beat down and this may be just enough to sway her to The Jackal’s side. After all, Nathan knows that Spinelli has no chance of beating him physically so that makes him a bully for beating on the sweet, if annoying and persistent, nerd. If only she could get them to agree to make a peaceful Maxie sandwich… Wishful thinking – but the hot cop plus the brainiac together would be perfect. We know it won’t go down that way. Sigh… Of course now that “The Bold and the Beautiful” has a transgender character why not introduce novel but real-world relationship structures like open relationships and threesomes into soaps?

Meanwhile Spencer hears that Cameron started the fire and will demand this his dad Nikolas Cassadine (Tyler Christopher) have Cameron arrested. Of course, Nikolas will say no, but you know how persistent Spencer is. I wouldn’t put it past him to wait until all the adults are out of the room and call 911 to report Cameron himself. Maybe Emma Drake (Brooklyn Rae Silzer) will talk Spencer down and dissipate some of his anger before he acts out.

Also today, Anna Devane (Finola Hughes) will come to talk to Olivia Falconeri (Lisa LoCicero). What the heck does she want with her. Seems random. Is Anna looking to get a third party warning to Julian Jerome (William deVry) to watch out for rogue assassins? Maybe Anna observed Julian and Olivia hooking up on New Years and thinks she has a relationship to him and will be willing to discuss the mobster to give her some info on his organization. Then again, Olivia also knows Sonny’s organization, so this may be a discussion about the other Port Charles mob family. Should be interesting.

And on the Michael Quartermaine (Chad Duell) front, some interesting things are happening. His brother Morgan Corinthos (Bryan Craig) is plotting with Kiki Jerome (Hayley Erin) to make Michael look like a druggy/alcoholic to try and take baby Avery/AJ away from him. (FWIW, I am still not warming to this Kiki – I miss Kristen Alderson. I’ll get over it…) To be fair, Michael isn’t helping his cause by boozing at the Metro Court – even Sabrina Santiago (Teresa Castillo) warned him that he was hitting the bottle hard. Today, when Sabrina is out with baby AJ, Kiki will try and take the baby from her and they will bicker.

Of course, Kiki has no right to take the baby and Sabrina is her nanny. But that won’t stop them from making a scene. Someone will break it up and Sabrina will get away with her charge. But then later, Sabrina will come upon Rosalie Martinez (Linda Elena TovarTovar) making a suspicious phone call about ELQ. This will be reported to Michael who will then confront her.

Last we saw Rosalie, she was being blackmailed by Helena Cassadine (Constance Towers). If Helena handed her asset over to Nikolas, it’s likely he’s using her to help with his secret ELQ takeover plot. But Michael is so busy with baby AJ and his family drama, he’ll likely be blindsided. If Morgan and Kiki make him out to be another Quartermaine addict and he loses baby AJ and ELQ, that will suck. But on the other hand, it will free Michael up to turn into a revenge monster and really torment his family. Hmm… Should be interesting to watch.

Tune in to today’s General Hospital so you don’t miss a beat then check back with CDL for all the critical spoilers, gossip and theories on “General Hospital