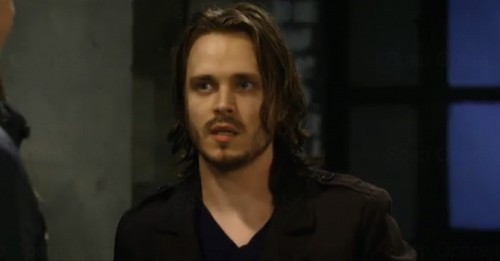 Check out these “General Hospital” spoilers to see where it goes from on the Tuesday, July 7 episode of GH. Monday was a bombshell day! We all heard Lucky Spencer (Jonathan Jackson) say that his and Liz Webber’s (Rebecca Herbst) son Jake is alive – although technically Jake is the child of Liz and Jason Morgan (Billy Miller). Lucky has to give his parents some answers before he shows up on Liz’s doorstep with their son in hand to explain how the child is still alive after dying as a result of a brutal hit and run. This one is complicated.

Over at the hospital, Brad Cooper (Parry Shen), Patrick Drake (Jason Thompson) and Lucas Jones (Ryan Carnes) talk matrimony. Patrick hassles Brad about when the two grooms will be saying their I do’s. Brad acts uncomfortable and pressured then turns it around on Patrick and asks him when he’s going to put a ring on Sam Morgan (Kelly Monaco) and lock her down. Way to spin things!

But then later, Brad will admit to Felix DuBois (Marc Samuel) that he’s keeping a huge secret from his honey Lucas about his family that will impact their wedding in a big day. “General Hospital” rumors indicate that Brad’s family knows nothing about Lucas. We know Brad’s biological family has mob ties so maybe his gangster family has no clue he’s gay. Either way, it’s a big deal.

Tracy Quartermaine (Jane Elliot) will announce she’s leaving town. She may be heading to NYC or other parts unknown to try and make some inroads on saving ELQ herself. Perhaps she’s going to go dig into why Brook Lynn Ashton caved to Nikolas Cassadine’s (Tyler Christopher) blackmail? On the way out of Port Charles, she runs into her ex Paul Hornsby, father of Dillon Quartermaine (Robert Palmer Watkins).

Rumor has it that Dillon has a half-brother running around Port Charles and Paul is there to check on his kids. There was talk of an age 50s recast of a character, but is Paul that recast or will we see the part reprised by the handsome and talented Paul Satterfield? In other out of town surprises, Lucky is heading back to town soon after playing along with his own kidnapping. Lucky will tell his parents more about this and we’ll get some answers that will prompt more questions.

Patrick Drake (Jason Thompson) gets word from the coma ward that Hayden Barnes (Rebecca Budig) is coming out of her coma. Her recovery is quite timely since Jake Doe (Billy Miller) and Sam were wondering where to dig up dirt on Nik. Once they hear she’s waking, Jasam needs to hot foot it to GH before someone else tries to shoot Hayden before they can hear the secret she’s been keeping.

Liz will go see Nik to tell tell him she’s not sure if they should keep on keeping the Jake identity secret. Nik wants to keep it quiet a little longer. Maybe Nik is worried that the five people left in Port Charles who don’t hate him now will join the hate squad if the Jake/Jason news breaks loose. Liz also says she thinks Sam and Jake are secret-keeping and they speculate on that.

Liz will then share the Hayden wake up news with Nik as well and the Cassadine prince will poop a golden brick (okay not literally). Nik will go nuts. What will he do? Assassin 2.0? Back from Canada, Lulu Spencer (Emme Rylan) runs into Maxie Jones (Kirsten Storms) and tells her she told big fat lies to Dante Falconeri (Dominic Zamprogna) about why she left town.

Maxie will no doubt blab that Valerie Spencer (Brytni Sarpi) was keeping her hubby company, but Lulu won’t be suspicious yet – she’ll be too worried about her own lies. But back at the loft, Val and Dante wake with regrets. This whole Dante-Lulu marriage and lies mess will get far more complicated and entangled before it clears up and there’s no telling how many bodies will be left in the wreckage!

Don’t miss Tuesday’s show for more details on Jake Spencer being back from the dead then come back to CDL for more “General Hospital” spoilers, gossip and news.

Watch the General Hospital video preview for the Tuesday July  7 episode below – Dante looks horrified after sleeping with Valerie!