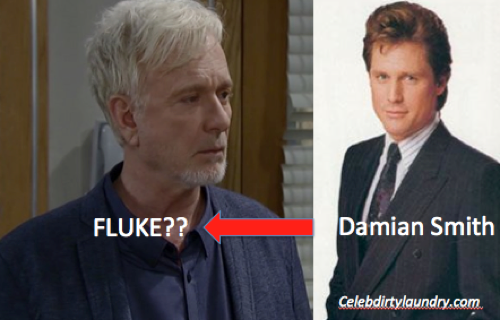 General Hospital spoilers tease that the never-ending Fluke mystery will finally be solved during February 2015. Fans of the ABC soap have been busting their brains for nearly a year now trying to figure out the identity of the Fluke, a villain who has stolen Luke Spencer’s identity and been wreaking havoc on the unsuspecting residents of Port Charles. Over the months several names have been thrown around as possible Flukes – but on particular names has been gaining a lot of traction as of late…Damian Smith.

General Hospital spoilers have been dropping hints and spoilers as to the true identity of Luke Spencer’s imposter for quite a while. So far we know that Fluke has a score to settle with the real Luke Spencer, despises Sonny Corinthos, desperately wants ELQ, was in the witness protection program and had plastic surgery to look like Luke Spencer, and is creepily flirtatious with all of the women in Port Charles. Thanks to incredible research by Soap Opera Spy’s Ava Smith, it looks like all of those characteristics seem to fit Damian Smith perfectly.

For those of you who aren’t familiar with Damian Smith, he was the son of mobster Frank Smith, and aired on the ABC soap in the early 1990’s. Technically Damian Smith is supposed to be dead, and was killed in a fiery explosion – but when has that ever stopped any GH characters from returning? The writers could easily change history and reveal that his death was faked and Damian was entered in to the witness protection program. Since it was a fire that he supposedly died in – there is a good chance his face was burnt, and underwent plastic surgery. Earlier this year Julian revealed to Alexis that Fluke had undergone plastic surgery, and apparently asked the doctors to make him look like Luke Spencer.

So, what is Damian’s beef with Luke Spencer and Sonny Corinthos? Well, back in 1994 after years of feuding and rivalries – Luke Spencer murdered Damian’s father Frank, and then Sonny Corinthos took over the Smith Family’s territory! After the fact Damian vowed that some day he would get his family’s territory back form Sonny – no matter what it took. Also, Damian Smith befriended Tracy’s son Ned in college and used their friendship to get closer to ELQ and steal it. Eventually Damian succeeded and stole ELQ from the Quartermaines – Monica and Alan, and was forced to sell it back and lost a huge chunk of money from the shady deal.

General Hospital spoilers teased that this week the writers would drop a major clue about the identity of Fluke. On the Wednesday January 8th episode Fluke held up a baseball bat to the real Luke Spencer and threatened him with it. When Luke asked “Where am I?” Fluke waved the bat in his face and asked, “You don’t recognize it? Look closer at it.” Luke recognizes that bat and mutters, “I’ll be damned I know where I am.” One could argue that the baseball bat is a clue that Fluke is Damian Smith. For those of you who don’t remember, in the fire that Damian Smith perished in – Justus Ward hit him over the head with a baseball bat and knocked him unconscious and left him in the burning building for dead. But, Luke’s wife Laura was actually arrested for the crime.

We also can’t ignore the fact that Bill Eckert’s name has been tossed around quite a bit on the ABC soap this week, and it was actually Frank Smith’s men that took out the hit on the Luke Spencer doppelganger. If ever there was a perfect contender for the identity of Fluke – it would be Damian Smith. Damian Smith despises Luke Spencer, Sonny Corinthos, has tried to steal ELQ in the past, was always overly friendly with the ladies, and can even be linked to Bill Eckert.

What do you think GH fans? Were you watching the ABC soap when Frank and Damian Smith were key players in Port Charles? Do you think that Damian Smith could the Luke Spencer imposter Fluke? Let us know what you think in the comments below and don’t forget to check CDL tomorrow for more General Hospital spoilers and news!