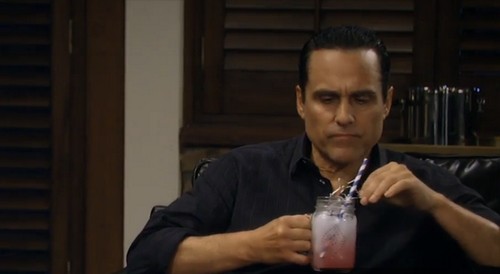 There are cheaters all over Port Charles today! Here are some hot “General Hospital” spoilers for the Wednesday, July 8 episode of the hit ABC soap. Lulu Spencer (Emme Rylan) who cheated emotionally on hubby Dante Falconeri (Dominic Zamprogna) comes home and they will have a MAJOR blowout. He accuses her of doing the dirty horizontal deed with her ex Dillon Quartermaine (Robert Palmer Watkins). They have a screaming match but eventually she’ll get him to see reason.

At some point, Dillon will also show up to explain they weren’t having sexy time in British Columbia. Dante will still feel betrayed about all the lies and that she didn’t trust him, but now he’s got two problems. First, his wife lied to him and chose Dillon over him emotionally. Second, he shagged his wife’s cousin Valerie Spencer (Brytni Sarpi).

Dante needs to tell Valerie what’s what so she will hopefully keep her trap shut. She won’t. Val will let it slip to boss Jordan Ashford (Vinessa Antoine) that she got jiggy with Dante. Not only that but Carly Corinthos (Laura Wright) will let it slip to Lulu that Val and Dante were lip-locking because Dante told his dad Sonny Corinthos (Maurice Benard). The sh*t is about to hit the major fan in their house!

In other cheating/non-cheating news, Dillon will tell Sabrina Santiago (Teresa Castillo) that Luke Spencer (Anthony Geary) was not cheating with Laura Spencer (Genie Franci) but was dealing with a kidnapping dealio. Sabrina tells him that Tracy Quartermaine (Jane Elliot) has ditched PC to try and nail Nikolas Cassadine (Tyler Christopher) for getting ELQ stock by nefarious means.

In other cheating news, Tracy runs into her cheating ex and Dillon’s dad, Paul Hornsby (actor yet unknown) at the Port Charles airport and lays into him for being a no-good cheater. Now is not a good time for Tracy to be reminded of adulterous husbands since she was just betrayed by Luke again – at least as far as she knows.

Over at Wyndemere, Sam Morgan (Kelly Monaco) gets into Nik’s safe but just as she and Jake Doe (Billy Miller) start digging around, Val shows up. Now they have to come up with a lie. TJ Ashford (Tequan Richmond) will chat up Alexis Davis (Nancy Lee Grahn) who we haven’t seen in a while. She’s not thrilled about something, but we’re thrilled to see her back.

Now where’s Julian Jerome (William deVry)? He’s rumored to be back soon and blaming Franco (Roger Howarth) for the death of his son. Soon he’ll know his son is alive though but not before making trouble for Franco. And speaking of troublesome people, Hayden Barnes (Rebecca Budig) is waking up. Patrick Drake (Jason Thompson) mentions this to Liz Webber (Rebecca Herbst).

Nik overhears and he freaks. He and Liz now need to rethink whether they should keep on keeping the Jake secret. Does Nik need to get an assassin to finish her off or should they come clean? And how will Lucky Spencer (Jonathan Jackson) showing back up with little Jake now alive again change their decision?

Don’t miss a moment of GH then head back to CDL for tons more “General Hospital” spoilers, gossip, and news.