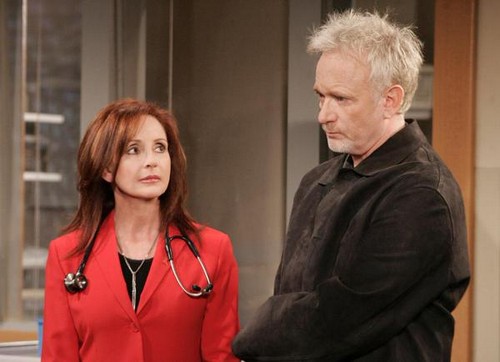 Monday, March 30: “General Hospital” spoilers tease that on Monday’s episode of the ABC soap, Bobbie Spencer and Tracy Quartermaine (Jane Elliot) are in for a shock – most likely related to the Spencer Family’s secret. Meanwhile, across town, Olivia (Lisa LoCicero) finds herself on the receiving end of some blackmail and Carly (Laura Wright) comes face to face with her arch nemesis.

Tuesday, March 31: Spoilers for the March 31st episode of “General Hospital” reveal Sam (Kelly Monaco) and Patrick (Jason Thompson) have a long talk about the future of their relationship, and the offer that he made her. Also on Tuesday, Jake aka Jason Morgan (Billy Miller) is committed to his new job – and Ric (Rick Hearst) continues to scheme against him.

Wednesday, April 1: General Hospital spoilers reveal that April 1st will mark the ABC soap’s 52nd anniversary and they have a huge treat for the fans of GH. The episode airing on April 1 will be a flashback to the show’s 1st episode which aired in 1963, and the truth about what happened to Luke Spencer (Anthony Geary) and the reason he turned into Fluke will finally be revealed.

Thursday, April 2: According to “General Hospital” spoilers, on April 2nd Jake Doe will have a dream about his real wife Sam Morgan, the flashback will leave him rattled. While Jake is daydreaming about Sam, Elizabeth (Rebecca Herbst) pays her old friend Patrick a visit and fills him on the latest drama with Jake Doe. Meanwhile, Luke’s family and close friends hem and haw over what to do about Luke – and what kind of help he needs.

Friday, April 3: Spoilers for GH tease that on April 3rd Elizabeth and Ric share a moment of passion. While Liz and Ric are canoodling, Spencer makes a shocking discovery about something his father Nikolas Cassadine Christopher Tyler) has been hiding, and Shawn and Julian Jerome (William DeVry) have a fiery confrontation.

So GH fans, are you as excited as we are for the anniversary episode? Do you think the rumors are true and Luke accidentally killed his own mother or his father? If Jake is dreaming about Sam, does that mean he realizes that he was married to her? Will Liz figure out what Ric has been up to? Let us know what you think in the comments below and don’t forget to check CDL tomorrow for more “General Hospital” spoilers and news.