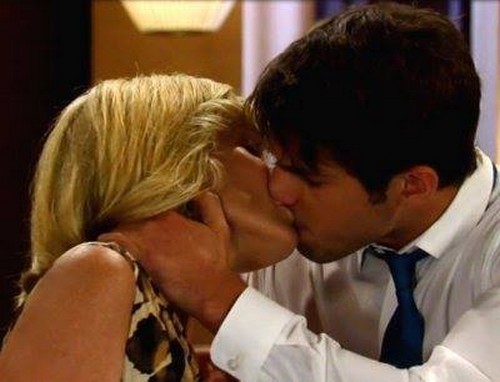 “General Hospital” spoilers indicate that all of the baby Avery Corinthos paternity drama is not as settled as we think. In fact, the odds are great that it’s Morgan Corinthos (Bryan Craig) and not Sonny Corinthos (Maurice Benard) who sired adorable little Avery. Ava shagged Sonny just once but she and Morgan were all over it all the time so, really, what’s the chance that Sonny’s sperm were the big winners?

First of all, it wasn’t like an independent lab tested the DNA. Remember it was Silas Clay (Michael Easton) that ran the test. Silas said he couldn’t just compare Morgan versus Sonny since they are father and son and too closely related to differentiate the results. Instead, Silas used Carly Corinthos’ (Laura Wright) DNA since she’s related only to Morgan and not Sonny. Based on this sample, Silas said Avery was Sonny’s daughter. But, come on, really?

Silas has proven he has no issue manipulating medicine across ethical boundaries to save Ava Jerome’s (Maura West) life. Silas knew that if Ava’s daughter wasn’t Sonny’s then Sonny would kill her. Even if Ava was the mother of Sonny’s son’s child, that wouldn’t stop him. The only evidence that would stop Sonny from murdering Ava was the notion that she was Sonny’s baby mama. So Silas knew what results would save her life.

Silas would rather Ava live out her life behind bars for killing Connie than be killed at Sonny’s murderous hands. So it was a no-brainer for Silas to fake the report. Consider this, if Silas was willing to kidnap baby Avery and siphon off her bone marrow to save Ava, why would he think twice about changing a little old lab report? But here’s the question, knowing that Avery is Morgan’s daughter, what will happen once this all comes out? So many relationships will twist based on the news.

– – Morgan and Kiki – –
Kiki Jerome (Hayley Erin) and Morgan are rejuvenating their relationship, but he really loved her mother Ava at one point (and maybe still now). In fact, with Denise DeMuccio on the scene flirting with Morgan, he can’t himself but think back to the good times with Ava who loved him too. If it comes out that Morgan is the father of her sister, Kiki will not be able to stomach it and they will be done.

– – Morgan and Sonny – –
Sonny will be crushed that Avery is not his daughter. Crazy as he is, Sonny loves his kids. Sonny will also be upset that Morgan bred a kid with Sonny’s mortal enemy Ava. Plus, once news breaks that Denise is Ava, Sonny will be ready to go kill Ava, but Morgan will go to battle with his dad to stop him from killing the mother of his daughter. This will pit Sonny against Morgan.

– – Morgan and Michael – –
Michael Quartermaine (Chad Duell) has custody of baby Avery and he is not likely to want to hand her over to Morgan. Consider this – Morgan doesn’t really have a career or means to support Avery and he has a fondness for gambling and the mob. Plus, Michael has grown very attached to Avery and likes playing house with Avery and Sabrina Santiago (Teresa Castillo). This will pit Michael against Morgan.

– – Morgan and Ava – –
Now that Ava is back from the dead (although no one knows it yet), once Morgan knows Avery is his child and Ava is alive, he will want to be a family. Morgan and Ava have a lot of chemistry and he will want to defend Ava from his dad which will put them together as a team against the world. I can see Morgan and Ava taking on all of Port Charles to be together with their daughter Avery.

– – Ava and Julian – –
Julian Jerome (William deVry) wants to be out of the mob, but he might get active again to defend his sister Ava. He’ll be happy to know she’s back from the dead no matter what else is going on and Julian will jump at the chance to have Avery around since Julian just lost his own child (as far as he knows). He has the resources to protect Morgan, Avery and Ava which could pit Julian against Sonny.

– – Carly and Sonny – –
Carly will not want Sonny to go after Ava when she is the mother of their granddaughter and involved with their son Morgan. However, Sonny is prone to see red and won’t be reasonable at all. Sonny will feel like he’s free to kill Ava now that he knows they’re not attached by Avery. But Carly will want to protect Morgan and his attachment to his baby mama. This could conceivably pit Carly against Sonny.

– – Michael and Kiki – –
Kiki will be devastated to find out that her lover boy is the father of her sister. Baby Avery is the tangible proof of Morgan’s love affair with Kiki’s mother and she won’t be able to deny it. This will be too much and Kiki may turn to Michael (as she always does) when she and Morgan are off. This will then outrage Morgan (even though he has no claim) and twill further pit Morgan against Michael.

The shocking revelation of Avery’s true paternity with Morgan as her father has the potential to rip apart the Jerome, Corinthos and Quartermaine families and pit family members against each other. This is the most exciting “General Hospital” spoiler we’ve come across in weeks. Finally, some real drama aside from the Jake Doe and Fluke plot lines which are too drawn out and tired for my taste. This is something we can really sink our teeth into!

Be sure to come back to CDL often for tons more “General Hospital” spoilers and gossip and let us know in the comments what you think the fall out will be once it’s revealed that Morgan is Avery’s father!