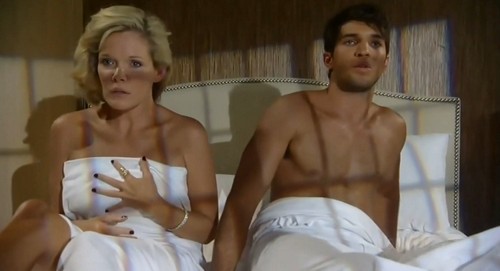 The catalyst of the imploding romances is none other than Ava Jerome aka Denise DeMuccio (Maura West). Just a couple of days ago, Morgan couldn’t help but plant a lip lock on Denise because she looks so much like Ava. That’s a no-brainer since Denise is Ava. Morgan told “Denise” that Ava is the only woman he’s ever loved. That makes it clear that Morgan doesn’t love Kiki and never has.

And Ava definitely loved Morgan. So even though Denise agreed that she and Morgan shouldn’t touch each other again to avoid hurting Kiki, those sparks were undeniable. It won’t be long before Morgan and Denise are in each others arms and then in bed together. And despite their best intentions, Kiki will absolutely find out and will be devastated.

And here’s where it will get worse. Denise will reveal – either outright or through her actions – to Morgan that she’s really Ava. Kiki will be crushed that Morgan will know before she does that her mother isn’t dead. And then it will get even more worse (if that’s possible) when Kiki finds out that Morgan and Ava have a child together once it’s revealed that Avery is Morgan’s daughter, not the child of Sonny Corinthos (Maurice Benard).

Poor Sabrina can’t seem to catch a break. First Patrick Drake (Jason Thompson) had to dump her for a back to town Robin Scorpio (Kelly McCullough) and then she lost her son. Carlos Rivera (Jeffrey Vincent Parise) may be the only man who truly loved Sabrina and now he’s dead even though she doesn’t know it yet. And now she’s going to lose Michael to Kiki.

Fingers crossed that this most recent dumping will flip a switch in Sabrina and she turns into a bad girl out for revenge on all those who hurt her. Wouldn’t it be fun if she teamed up with Nikolas Cassadine (Tyler Christopher) in the bedroom and boardroom to help him take down ELQ? Sabrina would be a really fun bad girl and she deserves some vengeance after the tough times she’s had.

So do you think that either of these split up then reformed couples will last? Do you think Kiki and Michael can make it in the long run? Could Morgan and Ava become the new Port Charles mob super-couple and take over the Jerome territory? And how will Michael handle it when Morgan moves to take custody of baby Avery? These romantic cataclysms will be spectacular to watch – can’t wait!

Let us know what you think will happen to these couples and who you want Morgan, Ava, Kiki, Michael and Sabrina to end up with! And check back with CDL often for lots more “General Hospital” spoilers, rumors and gossip.