General Hospital Spoilers: Could Nina Get Pregnant Despite Early Menopause – Franco or Ric the Daddy? 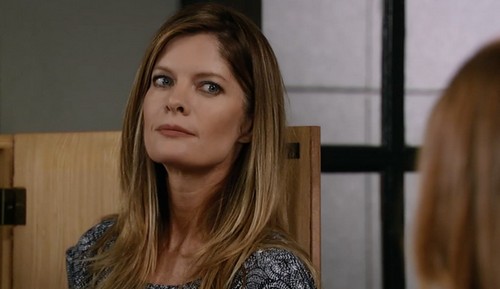 The “General Hospital” spoilers and rumors predict Nina’s pregnancy and discuss the causes and consequences of what could be some GH shocking news. Poor Nina Clay (Michelle Stafford) never seems to catch a break. Every time she’s tried a scheme to get what she wants, it falls short and Nina is the one who pays the price. And with the most recent misstep of marrying Ric Lansing (Rick Hearst), is Nina in yet another untenable predicament that will result in her ultimate unhappiness? Or will Nina get, at long last, what she most desires in life – a baby?

So far, Nina and Ric have not consummated their hasty “General Hospital” union, but now that Nina has told Franco (Roger Howarth), in no uncertain terms, about “all the sex they’re having” Nina will move to bed Ric for a couple of reasons. First, Nina wants to make true what she told Franco about all the post-nuptial nookie. Second, Nina wants reassurance that Ric really does want her and it’s not just a plot.

But, of course, it is a plot. But Ric will bed Nina for a couple of reasons of his own. First, he has to string Nina along to try and ensure his plot with her mom, Madeline Reeves (Donna Mills), succeeds. That means he needs to keep Nina happy and if it takes the horizontal mambo to convince her he loves her, so be it. Second, Ric’s ego is wounded horribly from the Liz Webber (Rebecca Herbst) fiasco.

Knowing that Nina desires him (or at least acts like she does) will re-inflate Ric’s ailing ego. Ric will sleep with her, at first, to keep Nina on the hook but then will keep sleeping with her because he needs the approval to make himself feel better. But Ric isn’t the only GH guy interested in sexy time with Nina. Franco is hard-core in love with Nina and will not give up without a fight.

Whether Franco will get Nina drunk, slip her a “relaxing” herb or sneak into her bed after dark pretending to be Ric, who knows? But Franco will be in her bed at some point during this ill-fated marriage. And that’s important because Nina will, in the next few months, likely turn up pregnant. Now, of course, Dr Britt Westbourne (Kelly Thiebaud) told Nina she was in early menopause.

That means that her ability to get pregnant is unlikely, but not impossible. Plus on GH they freeze people and bring people back from the dead, don’t they? And you’ll remember, that news was what prompted Nina to go baby-stealing. But, this time, Nina won’t have to steal anything – she’ll be pregnant with a baby all of her own. But the big question will be, is it Ric’s or Franco’s child? What a choice – – the panic room psycho or the reformed serial killer? Fingers crossed for Franco.

And all of this should break loose at the same time we find out that Nina’s baby that she supposedly miscarried in her coma is also alive and well. “General Hospital” rumors indicate that Kiki Jerome (Hayley Erin) is really Nina’s baby, but it could also be someone else that turns up new in Port Charles. Another option could be her “adopted” brother Nathan West (Ryan Paevey).

Nathan can’t be much older than 23, can he? Maybe he’s her baby… Food for thought. Really, anyone in their early to mid 20s in Port Charles is a potential candidate. But the pervasive gossip is that it’s Kiki. Either way, Nina will soon have two children rather than zero – if all the “General Hospital” rumors swirling around are to be believed.

What do you think? Would you rather Nina have Franco’s baby or Ric’s? Share your thoughts in the comments below and sound off! Check back with CDL often for lots more “General Hospital” spoilers, rumors and gossip!