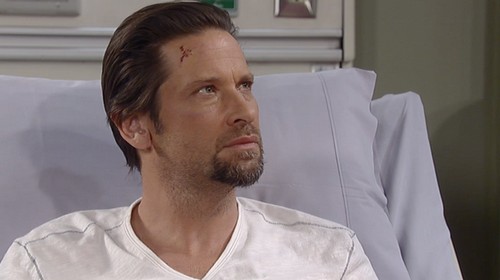 Here are some “General Hospital” spoilers for the ABC soap for Friday, February 27. Nina Clay (Michelle Stafford) got the good news that she was getting out of the loony bin and that all charges were going to be dropped. Nina told Franco (Roger Howarth) she’s be back to visit every day. Alexis Davis (Nancy Lee Grahn) then broke the news that Nina not seeing Franco is a condition of the negotiated deal. Well, we all know that Nina is definitely not stable… At the courthouse, we saw Nina call Avery Corinthos “her baby.” In addition to shocking Sonny Corinthos (Maurice Benard) and the rest of his family, this was part of her – spoiler alert – latest evil plot.

Except this time Nina is plotting to get herself put into Shadybrook, not to get out. Nina would rather be committed again so she can commit to her blossoming relationship with Franco then be free and unable to see her honey. Franco thinks she’s Phyllis but I can’t imagine that will slow Nina up. Her brother Nathan West (Ryan Paevey) won’t be happy to see his big sister re-committed but it’s safer for all the residents of Port Charles if she and Franco are in padded sequestration. Fun side note, Michelle Stafford is well known for her role of Phyllis Summers Newman/Abbott on the Young and the Restless.

And the all-new Kiki Jerome (Hayley Erin) made her first appearance today and, for me, it was shocking. She’s so unlike the Kiki I’ve grown to love. Oh well. I’ll adjust. Kiki isn’t happy to hear that Michael Quartermaine (Chad Duell) is fighting for custody of her sister Avery. Michael shows up then and Morgan Corinthos (Bryan Craig) punches him. Now on this juicy custody battle, there are some interesting rumors brewing.

Today, Carly Corinthos (Laura Wright) tried to convince Michael through a combination of guilt and affection to drop the case and let them all love baby Avery. Obvious spoiler alert: This will not work and Michael will not be swayed. The case will go on. The big rumor is there will be someone that will burst into the courtroom. There are a couple of possibilities here. First, now that we know that baby mama Ava Jerome (Maura West) isn’t dead, she may show up and say who she wants to have custody of her daughter while she serves out her sentence.

Second, it could be Silas Clay (Michael Easton) admitting that he fudged the DNA results and only said Sonny was the father so that Sonny wouldn’t kill Ava the moment baby Avery popped out. That would make Morgan the real baby-daddy and how awesome would that be? He’d be Port Charles’ hottest single dad – not counting all the other tasty single dads including Patrick Drake (Jason Thompson), Nikolas Cassadine (Christopher Tyler) etc, etc.