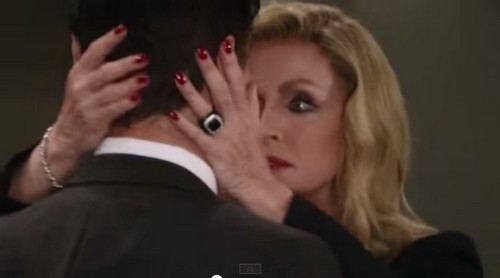 If Dante sees Lulu and Dillon in the hotel, he may call off the confrontation and just assume the worse. Either way, Dante is upset about the state of his marriage and Valerie will make a move to comfort him and things will get too intimate. Thing is, other than lying, Lulu isn’t doing anything wrong. But Dante will do bad, Lulu will find out and there will be a major crisis in their marriage.

Sabrina Santiago (Teresa Castillo) will tell Michael Quartermaine (Chad Duell) that if he wants to restore his relationship with mom Carly Corinthos (Laura Wright) and dad Sonny Corinthos (Maurice Benard) the surest route is to hand over baby Avery. Michael loves his baby sister, but also knows he took her from Sonny for the wrong reasons.

Needless to say, Sonny will be shocked by this overture and the Corinthos family will be all better – of course, there’s a new step-kid around – TJ Ashford (Tequan Richmond). Sonny sure loves to take other people’s kids, right? And with Avery back with Sonny, that means Denise DeMuccio (Maura West) will need to come around the house and she’s catnip for Morgan Corinthos (Bryan Craig).

But that’s okay – Denise will soon have a new BF to distract her from Morgan – Franco (Roger Howarth)! Franco randomly pointed out Denise at the MetroCourt to Nina Clay (Michelle Stafford) as his date. And Nina wants to know if Denise is really dating Franco. Seeing that it’s upsetting the woman who stole her baby, Denise will play along.

This will culminate in Franco sweeping Denise into a passionate kiss shocking all those watching including Carly, Nina and Kiki Jerome (Hayley Erin). The two will then have to play along and Franco and Denise will sit down for a real date. Watch for Nina to be staring daggers at them when they sit down to dinner, but where’s Nina’s date, her hubby Ric Lansing (Rick Hearst)?

Well Ric is busy considering whether he should bed his new wife’s mother Madeline Reeves (Donna Mills). How creepy is it that Ric would consummate that relationship before he consummates his marriage with new wife Nina? Madeline wants Ric to bed her to seal the deal on their nefarious partnership to institutionalize Nina and steal her money.

And up in Canada, the Lucky kidnapping is going nowhere fast. Luke Spencer (Anthony Geary) and Laura Spencer (Genie Francis) need a new clue. Holly Sutton (Emma Samms) is promised to show up this week, so we may get a glimpse of her today. We’ve got just a few weeks left of Luke before he rides off into the sunset, so this has got to be resolved soon!

Check out Friday’s cliffhanger episode of GH then head back to CDL for tons more “General Hospital” spoilers and gossip!