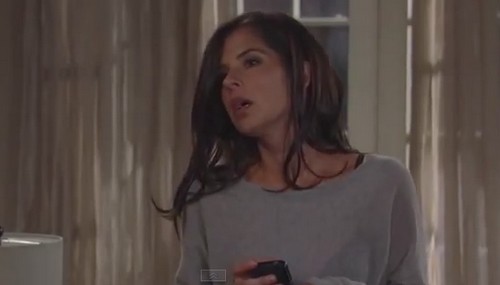 There will be lots of action on GH, particularly on the Jake storyline. Check out these “General Hospital” spoilers for the Monday April 20 episode. On Monday’s episode, Lulu Falconeri (Emme Rylan) will complain to Maxie Jones (Kirsten Storms) about needing to be away from cousin Valerie Spencer (Brytni Sarpi). Valeria tells Dante Falconeri (Dominic Zamprogna) that she’s leaving town. But Dante will want her to stay and be with her family since she just lost her mom and he’s worried about her. However, Lulu and her hubby are not going to see eye to eye on the Valerie issue. Will this throw a wrench into their happily ever after?

Lots happening on the Jake Doe (Billy Miller) storyline this week too! Just as Nikolas Cassadine (Tyler Christopher) discovers that Jason’s ring is missing, Spencer Cassadine (Nicolas Bechtel) will come complaining to his dad about how crappy his life is. Nikolas will be laser focused on the ring issue and will want to know if Spencer took it.

Spencer will have to admit that he did and that he lost it at Patrick Drake’s (Jason Thompson), and then Spencer and Nikolas are going to have a major showdown. Spencer isn’t happy that Nikolas isn’t doing what he wants about punishing Cameron Webber (Michael Leone) and his dad isn’t happy that the lost ring could ruin his scheming about Jake, his ELQ takeover and could cost him a lot of friends and family relationships if the truth about his involvement comes out or should we say, “when” the truth about Nikolas’ involvement comes out. Nikolas knows he’s got to get that ring, having no idea it’s already been discovered. Will he try to get it back and get caught in the act?

Also on the Jake front, it strikes Carly Corinthos (Laura Wright) that only one person in Port Charles has a vested in interest in keeping Jake a married man – and that’s Ric Lansing (Rick Hearst). Of course, Nikolas has a stake in this too, but Carly doesn’t have enough info to put two and two together on that front. Carly will try and confront Ric, but he’ll blow her off. However, Liz Webber (Rebecca Herbst) will want to know what that was all about and Ric will scramble to come up with an answer.

This is Ric’s chance to come clean, especially with Pete (the Jake photo doppelganger) lurking around and threatening to ruin everything. But Ric won’t be forthcoming and will continue to be the dastardly jerk he is and deny, deny, deny. That being said, the days of Ric’s plotting are numbered. With Pete on one side, Damien Spinelli (Bradford Anderson) snapping a pic of Pete and researching Hayden Barnes‘ (Rebecca Budig) finances, everything is rapidly unravelling. But Ric is not one to let go easy and he may, in fact, double down on this one.

And directly on the Jake front, when Jake retrieves Sam Morgan’s (Kelly Monaco) car keys from underneath the sofa at Patrick’s, Jake will also pull out his own wedding ring! OMG! Of course, Jake won’t recognize it, but Sam will and that will lead to all kinds of speculation about where it came from. Patrick will suggest innocuous things like that it may have fallen out of one of Sam’s boxes of stuff when he and Jake were carrying them in, but Sam will not be satisfied with that answer since, last she saw it, the ring was on Jason’s finger! This is yet another thread unraveling for Ric.

Also, we’ll see that Ellie Trout (Emily Wilson) and Nathan West (Ryan Paevey) will discuss their frustrations with the reunification of the Spixie. Nathan and Ellie will attend the Nurses Ball together which will make their former lovers green with envy. Nathan wants what’s best for Maxie, but Ellie just flat wants Spinelli back even those she’s trying to act like that’s not the case.