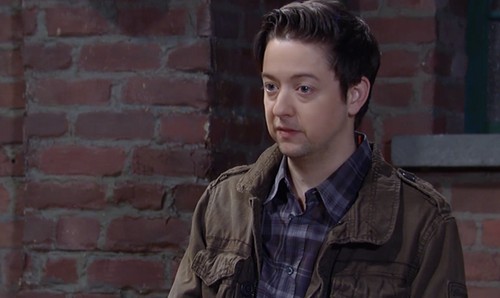 Can’t wait for today’s episode of GH? Here are some hot “General Hospital” spoilers for Wednesday, March 25. After the big fight where Nathan West (Ryan Paevey) knocked down Damien Spinelli (Bradford Anderson), Maxie Jones (Kirsten Storms) blew up and then Nathan said he was bowing out. Seems like all was good for The Jackal but Maxie will tell Spinelli today that he should not assume she and Nathan are done. Spinelli will take this in stride and will then ask Maxie for a favor and she will agree.

Also, it’s court day for both Franco (Roger Howarth) and Nina Clay (Michelle Stafford). Nathan will be there for his sister’s hearing and “General Hospital” spoilers reveal that he will ask Nina to take court seriously so she doesn’t end up in the nuthouse indefinitely. Alexis Davis (Nancy Lee Grahn) will make a big move in court. She knows Nina is faking, but can’t violate lawyer/client confidentiality so she’s come up with some sneaky lawyer move.

Franco has a plan for he and Nina once they get out of Shadybrooke. Remember that Olivia Falconeri (Lisa LoCicero) went to visit Franco? She thought he was crazy out of it on LSD and so she babbled the truth about Julian Jerome (William deVry) being her baby daddy. Franco will use this info to blackmail Olivia into letting he and Nina stay at the Metro Court. This will give the two nutters a high-class base of operations to make trouble for the “good” people of Port Charles.

And also on the Olivia baby front, Julian will ask Alexis to push on Ned Ashton (Wally Kurth) to make sure it’s true the baby is really Ned’s. It’s inevitable that Julian will find out, but I feel bad for him missing out on the pregnancy and birth. This is just pure speculation, but I’m hoping for a scenario where Olivia goes into labor unexpectedly and Julian just happens to come upon her and helps her out with delivering the baby.

Olivia will see how totally into the whole miracle of childbirth thing that she caves on the spot and tells him the baby he just delivered is his. Then Julian will just be thrilled and will cry and cuddle the baby and he will totally get past the whole lying thing (he knows he’s dangerous) and they will bond. Julian would kiss her in the emotional moment but then it sparks something – the whole hormonal, we just created life thing – and then they really kiss… Okay. Snap out of it. That’s my wish for how this storyline plays out and likely not what will happen at all, but a girl can dream, right?

Jake Doe (Billy Miller) is not sure Hayden Barnes (Rebecca Budig) is telling the truth so he’ll go to see his “wife” today at the Metro Court but Ric Lansing (Rick Hearst) is still there because they were going over their plot. It would be far too easy for Jake to spot Ric there so Hayden will tuck Ric away and she’ll show Jake some of the documents Ric has faked – the marriage license, Social Security card, etc.

This will raise some doubts in Jake’s mind but will it be enough to override his libido that’s all hot and heavy for Liz? Meanwhile, Carly Corinthos (Laura Wright) will show up out of the blue to tell her to be good to Jake and don’t pull any of her Liz crap. But then Liz will tell Carly about Hayden, the “wife” and share her doubts. Carly will also have her doubts. Will Carly hire Sam Morgan (Kelly Monaco) or Spinelli to investigate Hayden? If so, will Ric’s documents stand up to the scrutiny of one of these intrepid PI’s?

Sam is mulling over shacking up with Patrick Drake (Jason Thompson) and she feels uneasy about it. Sam will think about what Jake said just before he went into surgery about the one ring. And once she hears about Hayden, she may decide to investigate on her own even if Carly doesn’t ask her to. But then, Sam will see Patrick and her son Danny bonding sweetly and this will sway her to seriously consider Patrick’s offer.

Patrick may even try and use his kid Emma Drake (Brooklyn Rae Silzer) to sweeten the deal. If Patrick gets Emma behind the idea of Sam moving in, Emma can help sway Sam by saying she wants to be Danny’s big sister. This will have Sam really considering it, but then consider this. While Robin Drake may not come back played by Kimberly McCullough since she’s busy, they may recast the part. So if she shows up, that’s a problem for Sam and Patrick.

Plus, Sam is still married and her husband is back in town, unbeknownst to all but Nikolas Cassadine (Tyler Christopher). Liz Webber (Rebecca Herbst) just told Jake that if he is married, that was their last kiss. They were discussing Hayden but ironically, Jake really is married, just not to Hayden. And since “General Hospital” gossip points to the big Jake as Jason reveal not going to drop until November sweeps, that means there will be time for Jake and Liz to get serious once Ric’s plot inevitably fails.

And Sam and Patrick will be way more serious by then too. So once Sam and Jake know they’re married and shared an epic love, will they both just drop the people they now love? Or will they continue stay with their new loves and because they agree things are broken between them? If so, I think they’ll start sneaking around once they realize they can’t stay apart. After all, they are Jason and Sam.

And since there’s also talk that Liz will know about Jake before he does (maybe she’ll eavesdrop on Nikolas talking about it) but she won’t reveal it. That means she was keeping the truth from Jake to keep their relationship going and keep him from knowing about and going back to Sam and, more importantly, his son Danny. Jake will feel betrayed when this truth comes out.

On the Fluke front, there is some speculation that the oh-so-cute Valerie Spencer (Brytni Sarpy), Luke’s niece and daughter of the yet-to-be-seen Patricia Spencer (Dee Wallace), might be an ex of Nathan’s from way back. When she runs into Nathan, there may be a new/renewed love interest for him that will pull him away from the Spixie love triangle – or create a love quadrilateral.

And, an interesting casting note – Brytni Sarpy, new character Valerie – originally auditioned for the part of Jordan Ashford (Vinessa Antoine) and they loved, loved her but thought she was too young for the part. They kept her on their back burner casting list then when the part of Valerie was written, they brought her back in to play it. Her mixed-race heritage has me wondering if there’s any chance that Shawn Butler (Sean Blakemore) might be Patricia’s baby daddy since GH writers like to anchor new characters to existing ones.