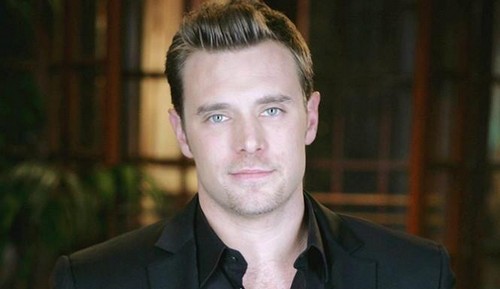 Check out some “General Hospital” spoilers for the ABC soap for Monday, March 9. Jordan Ashford (Vinessa Antione) will tell Anna Devane (Finola Hughes) that a mob war is brewing between the Jerome and Corinthos families. Remember Julian Jerome (William deVry) rebuffed an offer from Duke Lavery (Ian Buchanan) to end their animosity if Julian would hand over his territory. Not only did Julian say hell no, he threw down a gauntlet and told Sonny Corinthos (Maurice Benard) that it’s on and to bring it.

With this news in hand, Anna will try and stop the war before it starts by letting the leaders know she knows and telling them she’ll shut them down and lock them all up before they tear Port Charles apart with a bloody mob rivalry. But the very fact that Anna knows will cast suspicion on Jordan since Shawn Butler (Sean Blakemore) saw Anna leaving Jordan’s place. This will make Shawn and Sonny suspicious of Jordan which could put Jordan’s life in danger.

Over in the land of Spixie, Damien Spinelli (Bradford Anderson) scored a smooch this week from Maxie Jones (Kirsten Storms) that has her thinking warm and fuzzy thoughts about her baby-daddy no matter how she denies it to Nathan West (Ryan Paevey). This will be enhanced further when baby Georgie has a minor crisis that throws her concerned parents, Damien and Maxie, together and gives Spinelli the chance to show Maxie how good they can be together as a family.

Now that Jake Doe (Billy Miller) aka Jason Morgan is out of the hospital and police custody, he has to go get himself hired on with Julian’s mob crew. Liz Webber (Rebecca Herbst) will tell Ric Lansing (Rick Hearst) that she has feelings for Jake. Ric already knew as much, but he will be upset enough to go vent to his big brother Sonny about it. This shade, on top of Carly Corinthos (Laura Wright) admitting she kissed Jake, will cause Sonny to amp up the surveillance of Jake using Shawn.

Jake, meanwhile, has a dream about a woman but he won’t be able to tell who it is. He’ll enlist Sam Morgan (Kelly Monaco) to help him figure out who this mystery woman is hoping it’s someone who can tell him who he really is. Of course, it’s Sam herself, but neither will realize that. Since Sam is working with the Jackal on the Patricia Spencer case, there will be an overlap and Damien will encounter Jake.

Damien will wonder about the mystery man’s ID when Jake uses a particular phrase that the Jackal recognizes as one Jason Morgan frequently used. Spinelli won’t want to tell Sam that Jake may be Jason because he doesn’t want to get her hopes up, but rumor has it that the Jackal will take on finding Jake’s true identity as a side project even as Spinelli continues to unravel the mystery surrounding Luke Spencer’s (Anthony Geary) DID.

A “General Hospital” casting news leak reveals that Patricia Spencer has been cast and that Dee Wallace will take on this pivotal role. Dee is a veteran actress most recognized as the mom from E.T. No word yet on when she will appear, but likely in March which is when Rebecca Budig is also slated to start her new role in Port Charles. This is going to be an exciting month with these two great additions to the “General Hospital” cast coming on line.

Monday’s episode will be action packed – be sure to tune into ABC then check back with CDL daily for “General Hospital” spoilers and rumors.