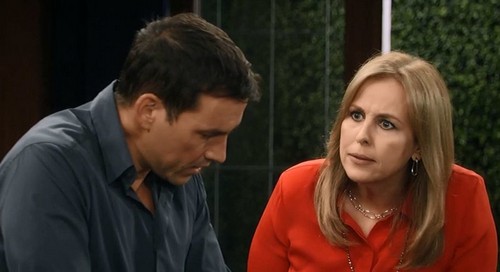 Luke Spencer (Anthony Geary) has left Port Charles (but might be returning!), however “General Hospital” spoilers reveal that Laura Spencer (Genie Francis) is here to stay – at least for a while. And Laura’s stint in Port Charles won’t be without a few hiccups because now she’s a got a nemesis in the form of Luke’s jilted ex Tracy Quartermaine (Jane Elliot). Here’s what to expect when these two start up an epic “cougar” fight.

You really can’t blame Tracy for hating Laura. Tracy and Luke were at their engagement party and ready for their happily ever after. Luke had just battled the worst of his demons and come out on the other side. Tracy has been there with Luke through the worst of his trials – Laura mostly got all the romance and adventure – Tracy has been dealing with Fluke and his murderous antics.

And for Laura to come in and swoop him up was enraging. That’s like you taking a junker car and revamping it into a beautiful classic car and then the former owner driving it away while flipping you off. Poor Tracy. Although Luke was instructed not to tell anyone about the kidnapping and to break off his engagement, he could have whispered in Tracy’s ear in private – but he chose not to trust her.

That’s a big issue and one that Tracy can’t get past. When she looks at Laura, all Tracy will see is Luke picking Laura over her, in terms of trust even if not in terms of love. Tracy has always felt like she was second best to Luke’s true love Laura so this is the nail in the Tracy/Luke coffin. And with Luke having left town, Tracy will focus all her ire on Laura rather than forgive her in light of the kidnapping.

Plus, over and above the abject humiliation of being dumped at her engagement celebration, there’s the whole ELQ thing. Laura’s son Nikolas Cassadine (Tyler Christopher) lied and finagled his way into the CEO chair of Tracy’s family business. That’s yet another reason for Tracy to hate Laura. And now that Tracy has no power at ELQ, she has to sit back and just watch what Nik will do with the biz.

Also, now that Sabrina Santiago (Teresa Castillo) and Tracy Q are BFFs, look for Sabrina to take Tracy’s side in this fight. Plus with Sabrina in bed with Michael Quartermaine (Chad Duell), it only makes sense that they would all close ranks around Tracy to take on Laura and her evil son Nik. Laura has always been a pretty nice gal on GH – it would be nice to see her with an edge and take her son’s side.

Look for lots of Tracy vs Laura in the coming weeks – Luke left on July 27 but Laura will be around Port Charles for several more months. That’s enough time for some serious shenanigans and outright war between these two Port Charles power players. It will be interesting to see how this rivalry plays out and who comes out on top.

Be sure to come back to CDL daily for more “General Hospital” spoilers, rumors and gossip!