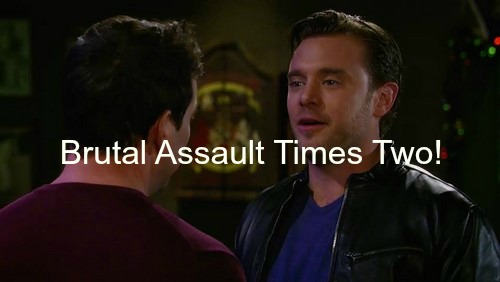 “General Hospital” (GH) spoilers for the week of December 14 through 18 indicate that Liz Webber (Rebecca Herbst) and Nikolas Cassadine (Tyler Christopher) will finally be held accountable for their months of lying when both are attacked by angry victims of their deceit.

Jason and Carly Wreak Havoc
Jason Morgan (Billy Miller) stops by to see Liz but he’s not ready to run back into her arms. He’s mad right now and then turns all that anger on Nikolas. Jason brutally attacks Nik who is stunned by the intensity of the assault that goes down at The Floating Rib.

Nikolas was trying to get answers from Hayden Barnes (Rebecca Budig) about who Curtis (Donnell Turner) is but then Jason starts hitting and things go from awkward to scary real fast. At General Hospital, Carly Corinthos (Laura Wright) stages a public verbal assault on Liz.

Carly calls out Liz for her lies, obviously intent on a public humiliation that will make Liz look bad at work. Franco (Roger Howarth) lurks nearby and then offers Liz comfort. He survived a similar Carly confrontation recently and offers some Franco-isms that will make Liz feel better.

Later, the most awkward conversation ever goes down between Liz, Jason and Sam Morgan (Kelly Monaco). Carly will encourage Jason to socialize more now that he’s loose of Liz. Sam has a confession to make to Jason – is it about their relationship or her split with Patrick Drake (Jason Thompson)?

Liz will show up with a date for the gala that surprises everyone. Does Jason decide to take her? Or maybe Franco takes her since Nina Clay (Michelle Stafford) is working the event? Nikolas would be another shocking choice since they are both uber-hated in Port Charles right now.

Anna Investigates Paul – Then Drops it to Go Save Robin
Mac Scorpio (John J York) and Anna Devane (Finola Hughes) are neck deep in investigating Paul Hornsby (Richard Burgi) and are digging into his complex personal life. Anna is also looking into whose corpse it was masquerading as Carlos Rivera’s (Jeffrey Vincent Parise) body.

Speaking of Paul’s convoluted personal life, he’s out with Tracy Quartermaine (Jane Elliot) when Ava Jerome (Maura West) spots them and gets jealous. Ava has the right of it because it seems Tracy is falling for Paul – what does this brilliant woman see in that sly silver fox?

Paul’s plans may be foiled when Monica Quartermaine (Lesley Charleson) suggests a charitable contribution that conflicts with his agenda. But Paul can’t come out and say why he doesn’t want this to go down – how will the sly criminal get what he wants?

Robin Rescue Mission Is a Scorpio-Drake Affair
Patrick wants to help Emma Drake (Brooklyn Rae Silzer) move past his split with Sam so he takes her to Paris to look for her mother. They don’t find Robin Scorpio (Kimberly McCullough) but get a hint that she’s elsewhere and may be in danger. Emma says they need Anna’s spy experience to help.

Anna drops her Paul probe and jets to meet Patrick and Emma and Robert Scorpio (Tristan Rogers) pitches in as well. They go looking for Robin in other shady places and what they find stuns them. Patrick is shocked and has to figure out where his life will go from here.

Johnny Targets Valerie – Dante Considers Reconciliation
Valerie Spencer (Brytni Sarpi) is under attack. First it’s Maxie Jones (Kirsten Storms) that comes at her but Valerie stands up for herself nicely and gets back in Maxie’s face. The one Val doesn’t see coming, though, is Johnny Zacchara (Brandon Barash).

Johnny is doing Lulu Spencer’s (Emme Rylan) dirty work and sets up an accident for Valerie so he can save her and get some info to help further the revenge scheme. Dante Falconeri (Dominic Zamprogna) thinks about giving marriage with Lulu another chance.

Laura Spencer (Genie Francis) counsels Lulu to think before she acts out and ruins any shot at fixing her marriage. Too late. Maxie and Nathan West (Ryan Paevey) share sexy time and Maxie and Dillon Quartermaine (Robert Palmer Watkins) later reminisce about Georgie Jones on her death anniversary.

Michael Has Sabrina Pregnancy Suspicions
Monica takes a look at Sabrina Santiago’s (Teresa Castillo) sonogram pic and notices that what she’s seeing doesn’t add up to what Michael Quartermaine (Chad Duell) was told. Monica will chat with Michael who will have to ask Sabrina some uncomfortable questions.

And Carlos ignored Paul’s orders to get the heck out of Port Charles ASAP. He’s still lurking around keeping an eye out on Sabrina who he knows is preggers with his bambino and decides to hide in plain sight. How amazing would it be if he shaved the beard and went blond?

Toys for Tots Nutcracker Gala Kicks Off Friday, December 18
On Friday, the Nutcracker Gala kicks off at the MetroCourt and there will be surprises galore. India Arie performs and GH will do good in real life with this charity benefit. Nina has a scheme for Crimson that may tie into the gala.

And will there be a proposal during the event? Julian Jerome (William deVry) talks to Molly Lansing-Davis (Haley Pullos) and Kristina Corinthos-Davis (Lexi Ainsworth) and has a big question for them – is he asking permission to get hitched to their mom? Molly for sure won’t like that.

All this and more on the week of GH for December 14 thru 18. Don’t miss a moment and check back with CDL for tons more “General Hospital” spoilers, gossip and more.