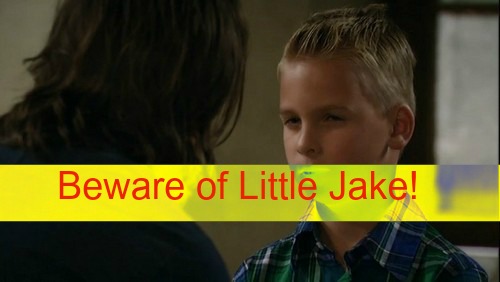 Today’s “General Hospital” spoilers will take a look at what’s going on in that cute head of little Jake Spencer (James Nigbor) and why we think Port Charles’ next big bad is this little boy. There’s a great black and white movie from the 50s called The Bad Seed. It’s got an adorable blond girl, cute as a button, who’s a total homicidal sociopath. That’s what I see when I look at little Jake. Remember the other day? That glare on his face? Chilling!

What’s funny is that James Nigbor is one of a pair of twins – his brother is Edward Nigbor – and they both played Jake Spencer back in the day. Now TPTB at GH have recast just one of the twins, James, to reprise the role of little Jake.

And boy did they pick the evil twin… Little Jake is just beginning to fulfill the terrifying character that’s been written for him – and that just might make the ridiculous plotline of him coming back from the dead well worth the screen time.

Sure it seemed like a happy day in Port Charles when Lucky Spencer (Jonathan Jackson) found little Jake on Cassadine Island, but that kid is not all he’s cracked up to be, and in fact, may be a murderer in the making.

Doesn’t anyone think it strange that Helena Cassadine (Constance Towers) just handed little Jake over without a fuss or that Lucky just happened to find out about him all these years later? Was it good sleuthing or did Helena leak the information because she had completed little Jake’s training?

Helena loves nothing more than to send pawns under her control out to do her mischievous and murderous bidding in Port Charles. Think about it – she brainwashed Lucky and Jake Doe (Billy Miller) and the mind of a young child is far more pliable.

There is absolutely no telling what Helena has done with that child in the years she had him on Cassadine Island. Plus, Jake hasn’t told anyone exactly what happened to him there – that’s because he’s been ordered not to.

And, pray tell, why hasn’t Liz Webber (Rebecca Herbst) put her son in therapy for the ordeal? Liz is so focused on her lies and keeping Jake away from his wife and other son that she has totally dropped the ball with little Jake’s mental health.

Who doesn’t get a psychiatric evaluation for a child who was kidnapped for four years? And why no concern over Jake’s bruised face the other day beyond getting him a Band-Aid? How did the kid get banged up? Did he assault someone at school or vice-versa?

Here’s what I think. Helena has had little Jake on a strict training regimen for the past four years. She’s given him biographies to memorize on everyone in town, plus he probably knows the layout of the city, of Wyndemere, the MetroCourt and GH itself – everything he needs to scoot around sight unseen and make trouble. Heck, she may have even had him trained in munitions, bomb-making and espionage. That kid could be a little bitty Jason Bourne, capable of absolutely anything.

So what might Helena be planning to use little Jake for? First, let’s assume that he knows exactly who big Jake is since Helena knows this info too. That means he also knows that Jake is married to Sam and has another son – Danny Morgan. Would Jake hurt Danny to keep Jason/Jake to himself? What stake does Helena have in these Port Charles’ relationships? She wants Spencer Cassadine (Nicolas Bechtel) to be safe and may want Nikolas Cassadine (Tyler Christopher) out of the way.

Helena also has it in for a number of townspeople including Laura Spencer (Genie Francis) among others. Could Helena be planning on using little Jake to carry out a bombing like the one that big Jake failed to complete?

Helena likes to do things on either a mass scale like wiping out most of the town or on a targeted program like taking out one person she hates. Even little Jake may not know yet what he’s supposed to do. Looks like he’s lying in wait until Helena issues marching orders.

The bottom line is, we don’t know what evil little Jake will get up to – we only know that he will be getting up to something and sooner rather than later. It may coincide with Jake’s reveal on November 6th or may fall in line with the revelation of why Nikolas has turned dark and took over ELQ.

We should see more on little Jake’s true purpose for being back in Port Charles within the next three to five weeks and it’s going to be explosive. This is a great plotline – love the idea of an evil kid…