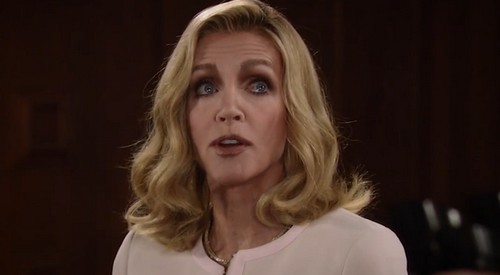 “General Hospital” spoilers are heating up and Kiki (Hayley Erin) finally discovered that her mother, Ava (Maura West) and boyfriend, Morgan (Bryan Craig) have been sneaking behind her back for months. And, if that’s not enough GH drama, it looks like she will learn her real biological mother is none other than Nina Clay (Michelle Stafford). Poor Kiki is destined to be the next Shadybrook patient.

Morgan finally decided to do right by Kiki and end the torrid affair with her mother, Ava. He told her that he has to put Kiki first, and he couldn’t do that while having a relationship with her mom. Ava reacted by trying to make Morgan feel guilty for deserting her in jail. Morgan bluntly told Ava it is over (let’s hope she’s NOT pregnant) and walked out of the jail. Meanwhile, Kiki decided to go see her dead father’s apartment. She sat and gazed at a photo of them. She thought back at the last time she saw Silas alive. She cried thinking about her mother and Morgan together in bed. In her heart, she knows that Franco (Roger Howarth) told her the truth. Now, what will she do with the information?

Fans have speculated for quite some time – even before Dr. Silas Clay (Michael Easton) was murdered -that Kiki is Nina’s (Michelle Stafford) daughter. The latest in the rumor mill is that Madeline (Donna Mills) murdered Dr. Clay to protect the secret from Nina. Ric (Rick Hearst) and Madeline tricked Nina into believing she was crazy in hopes they could gain control of her money. So, if they masterminded a perfect plan, where did it go wrong?

Madeline is sure that Ric didn’t kill Silas. She acted as if she knew that he didn’t. There is a good reason for that – it’s because she is the murderer! It is speculated that she came to his apartment to try to get him to convince Nina to sign the papers. Silas revealed to her that Nina didn’t kidnap Avery because he did. No one knows exactly what else was said – other than Silas threatening to reveal ALL of Madeline’s secrets. Is it possible that Dr. Clay was going to tell Kiki and Nina everything – including revealing that Kiki is Nina’s daughter? That is a secret that both Ava and Madeline would kill to keep buried.

Nina has nothing left to lose at this point. How will she react to knowing that the woman that stole her husband away from her years ago, also stole her daughter from her, too? And, to make matters worse- her sidekick and only true friend is a reformed serial killer. A word of advice to Ava and Madeline – watch your back because Franco and Nina are planning your demise.