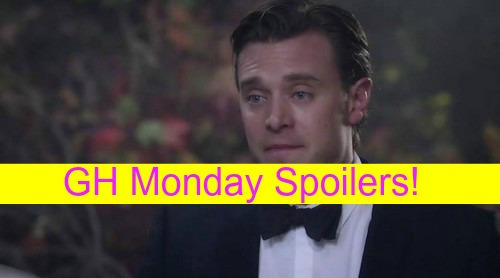 “General Hospital” (GH) spoilers indicate that Monday is the day when the rest of Port Charles will find out that Jake Doe (Billy Miller) is really Jason Morgan. We’ve all been waiting months for #JasonRevealed and it took most of Friday’s show for Carly Corinthos (Laura Wright) to convince Jason the truth that he didn’t want to face, but now he’s got to tell Liz Webber (Rebecca Herbst). And then the real drama will begin…

Interestingly, it’s Liz who is the reason that Jake did not want to accept his identity reveal. He loves Liz so much and knows this news means he can’t marry her today. Although the rest of us know that Liz is in on this lie, Jake has no clue.

He sees her as the sweet nurse, the healing angel who took him in all those months ago and has cared for and loved him unconditionally. No doubt Jake would have less angst if he knew that Liz already knows he’s Jason, but he doesn’t.

Right now, Jake feels like he’s going into that church to crush Liz on what should be the happiest day of their lives. He doesn’t want to hurt the woman he loves and has zero feelings for Sam Morgan (Kelly Monaco).

But Jake is also not a liar by nature, so he will man up and make the announcement to Liz and everyone at the same time to rip off the Band Aid. On Monday, Jake will be the one to make his own reveal and then all hell will break loose.

The wedding day will spread over into a couple of days next week as this all unfolds. Even though Liz already knows the truth, the heartbreak Jake will see on her face after he tells her he’s Jason will be genuine.

Liz will assume that Jake is about to walk out on her and go back to his wife now that he knows he’s already married. But Jake will stun everyone when he doesn’t do that. Of course, the wedding is a non-starter at this point since he’s already married, but he still wants Liz.

And as passionately as he feels love for Liz, Jason feels hate for Nikolas Cassadine (Tyler Christopher) in this matter. Jake will turn all his anger at not being able to marry Liz towards Nik and this will end in a brawl in the aisle of the chapel.

Jake is probably expecting Liz to tell him they’re done since he’s married, but Jake will also not get from Liz what he was expecting. Liz and Jake will surprise each other by admitting this reveal has not changed their feelings for one another.

Of course, that’s all based on Liz’s lie sticking that she didn’t know and only found out Jake was Jason when he told her. If she can keep selling that fib, Liz may have a good shot at keeping Jake, so long as he doesn’t get those Jason memories back anytime soon.

But since Hayden Barnes (Rebecca Budig) is in the mix, who knows how long this tenuous thread will hold. If you were hoping to see all the events in the #JasonRevealed spoiler video unfold today, no doubt you’re disappointed. We all are.

But the good news is, we have more wedding action and fallout from the reveal to look forward to next week and for some time. We’ll see soon that Sam acts on the assumption that she’s going to get her husband back (which won’t happen as she hopes) and Patrick Drake (Jason Thompson) will be left reeling when he gets dumped by Sam. And then Patrick will drag Robin Scorpio (Kimberly McCullough) into this and Robin may be the one to help Jake restore his memories. So much more to come!

Don’t miss a moment of GH and come back to CDL for tons more “General Hospital” spoilers, casting news and more.