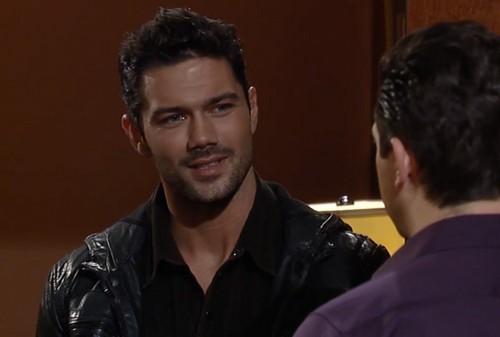 General Hospital spoilers tease that the episode airing on Thursday, January 8 will be another exciting one, and the Fluke storyline will be picking up speed. GH rumors have been flying around for quite a while that Bill Eckert may be the Luke Spencer impersonator – and the writers are definitely implying that. Ironically, the building that Michael Quartermaine wants to remodel and turn into a clinic is in Bill Eckert’s name. According to the General Hospital spoiler video for January 8, Michael is still determined to buy the old Spencer home – and he asks Ned to reach out to someone that may be able to help him.

In other General Hospital news, Johnny Zacchara is free man and he hasn’t even been out of Pentonville for 24 hours and he is already stirring up drama in Port Charles. GH fans noticed some sparks flying between Johnny and his ex Lulu – and in the General Hospital spoiler video for Thursday’s episode Lulu giddily tells Maxie that Johnny is back. Meanwhile, Dante and Nathan are not as thrilled by the news and in the all new General Hospital promo, Dante threatens Johnny, “Stay the hell away from my wife.”

General Hospital spoilers in the sneak peek of January 8th’s episode also tease that Sonny Corinthos gets a new inmate at Pentonville; rumor has it that it is none other than Julian Jerome. The promo video also teases some more bonding between Carly and Jake aka Jason Morgan – according to spoilers for the ABC soap Jake will open up to Carly and reveal that he is beginning to question if Sam Morgan was right about him and he was the masked gunman. Meanwhile, across town, Sam Morgan pays Nikolas Cassadine a visit and asks him for a favor.

So GH fans, do you think Fluke is Bill Eckert? What woman do you think Michael is trying to get Ned to reach out to, someone from Bill Eckert’s past? Will Lulu cheat on Dante with Johnny Zacchara? What does Sam want from Nikolas? Let us know what you think in the comments below and don’t forget to check CDL tomorrow for more General Hospital spoilers and news.