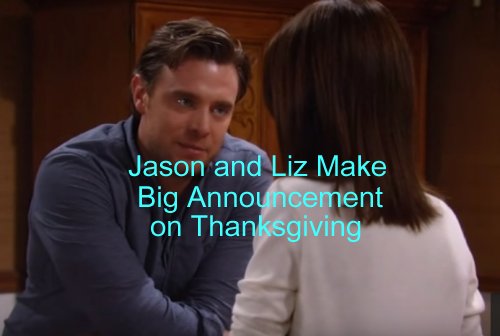 “General Hospital” (GH) spoilers for Wednesday, November 25 reveal that Jason Morgan (Billy Miller) and Liz Webber (Rebecca Herbst) are at the Quartermaines for Thanksgiving and have big news to share. What could it be?

Now that Helena die all knowledge of what was done to Jason could die with her – unless, of course, Robin Scorpio (Kimberly McCullough) knows what went on and can tell Jason. But that’s only if Robin can get away from her captors.

So is the big announcement that Jason and Liz make at the Quartermaines that Helena has met her maker? Or is something much more personal – wouldn’t it be a hot mess if they announce they’re having a baby and Liz is pregnant?

Could Liz be preggers – or could she have fibbed to Jason that she’s expecting to get him to recommit to her and her boys? “General Hospital” buzz indicates that Jason will reconfirm his love to Liz after they leave Cassadine Island empty handed.

Sam Morgan (Kelly Monaco) will go back to Patrick Drake (Jason Thompson) and reaffirm her affection for him. Seems like everyone has settled down with who they’re meant to be with – Jason with Liz and Sam with Patrick. Nah… that’s just for now.

What else could the Jason-Liz announcement at Thanksgiving be? Hmm… They could announce that the wedding is back on as soon as Jason can get a divorce from Sam. Or Jason could say he’s giving up the quest for his past and will live in the present – but that is so unlikely.

Other things that Jason could announce is that he’s renouncing his former mob life, wants to embrace the Quartermaine family, and will work with Tracy Quartermaine (Jane Elliot) and Michael Quartermaine (Chad Duell) to get ELQ back from Nikolas.

No doubt most of the Quartermaine clan will receive Jason, Liz and their big announcement warmly – all except for Tracy. She is not happy to have a mobster in their house. Of course, she doesn’t know that Paul Hornsby (Richard Burgi) is also a deadly underworld player.

We can expect tons of family drama and angst at the Quartermaine Thanksgiving shindig – wonder if being in the Q mansion will trigger any memories in Jason. You’ll recall he’s felt at home there since the first time he visited as “Jake Doe.”

Don’t miss a moment of this week’s shows then head back to CDL for more “General Hospital” spoilers, gossip and more.