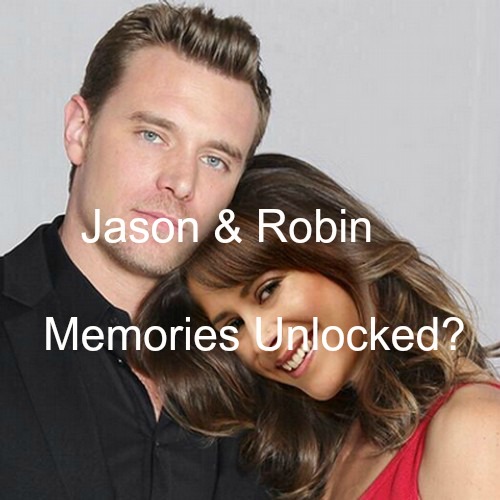 “General Hospital” (GH) spoilers reveal that Robin Scorpio (Kimberly McCullough) will be back in Port Charles soon and she will run into one of the most important people in her life – Jason Morgan (Billy Miller) – before she leaves the character canvas.

Here’s a look at what we can expect from the Jason and Robin reunion and how these two former lost souls may be able to help each other yet again. First, where they meet is critical. GH spoilers indicate that it’s somewhere very important to both of them.

Will they meet at the bridge where they had so many significant encounters? Remember the night they held hands and didn’t jump while they talked about Robin’s HIV diagnosis? Plus, their first kiss was on the bridge. That was their spot – it makes sense that’s where they might meet.

GH spoilers indicate that Robin leaves her house to think – likely after Sam Morgan (Kelly Monaco) comes in the front door without knocking like she owns the place and interrupts Robin with Patrick Drake (Jason Thompson). Robin will be nice enough to let them talk.

Robin will head out for a walk to ponder the new life ahead of her now that she’s finally free from her Cassadine captors. Robin will run into Jason, but what’s interesting is, she won’t recognize him. Robin does not know the face that Jason is wearing.

According to GH spoilers, it will be Jason that actually recognizes Robin. He’s seen photos of her at Patrick’s place and knows they have a shared history, even though the details are still lost in his amnesia brain.

Once Jason says her name and they meet formally, they will share a conversation that’s very important to him. What’s important about this talk for Jason is that Robin is someone that will give him an unbiased history lesson about who Jason Morgan was.

When Jason hears about himself from Liz Webber (Rebecca Herbst), Sam or Carly Corinthos (Laura Wright), it’s always colored by what they want from him. Liz wants love, Sam wants love, Carly wants to be all up in his life and Robin is just there sharing, asking nothing in return.

Once these two warm up to each other and Robin convinces him he can trust her, their dialog will be meaningful to both. Robin and Jason have saved each other numerous times and she’s the reason he’s back in Port Charles now.

Jason may also have some insights to offer into Robin’s new lease on life after her rescue from the Cassadine compound. Both have been at the mercy of the Cassadines, so that’s another commonality they share.

Jason absolutely owes Robin his life and their talk will help Jason see a more likable side of himself. Jason has a pretty low opinion of his shady past, but Robin can color that in with some of the things he’s done to help people – her in particular.

Since Robin is attached to Patrick and wants nothing from him, this encounter will be welcome since she doesn’t need him to feel or say anything to make her happy. Robin has no expectations so this is a chill way for Jason to vent about his life.

Plus, Robin has helped Jason with amnesia before – could she help him once again? Robin has been doing some pretty out of the box research the last few years – is there any chance she has some medical knowledge that could help Jason regain his hidden memories?

GH spoilers from showrunner Nathan Varni tease that Jason would likely recover all of his memories at some point in 2016 – could it be because of something Robin does for him before she and Patrick leave town for good?

Whatever comes out of this encounter, it will be cathartic and productive for both of them – and for GH fans. There’s plenty of Scrubs, Liason and JaSam fans – but there’s also a faction that prefers Jason with Robin. To give the former lovers a chance at closure is phenomenal, no matter how it goes down.

Stay tuned to CDL for more “General Hospital” spoilers and news on this and other storylines.