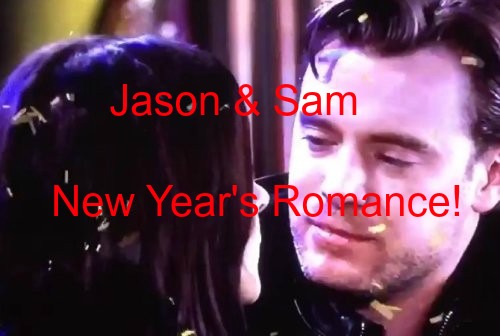 “General Hospital” (GH) spoilers tease that the week of New Year’s will be action-packed in Port Charles. Nikolas blackmails Jason, Morgan’s life is in danger, Lulu and Johnny heat up and someone makes a romantic proposal.

Here’s the GH spoilers you need for the week of Monday, December 28 thru Friday, January 1, 2016.

In the Corinthos camp, Sonny Corinthos (Maurice Benard) is on a mob business call and Morgan Corinthos (Bryan Craig) eavesdrops. Morgan decides to step up and help his wheelchair bound dad and goes somewhere he should not.

Morgan’s life is in danger – will Jason Morgan (Billy Miller) be there to save him like he saved Sonny? Also, Jason has three big conversations this week. He chats with Damien Spinelli (Bradford Anderson) who reassures him that Jason is not a stone cold killer.

Later, Jason runs into Robin Scorpio (Kimberly McCullough) and they have a mutually helpful talk. Finally, on New Year’s, it looks like Jason and Sam Morgan (Kelly Monaco) have a warm talk and may share a kiss – they sure look cozy at a party. Is this the start of a new romance?

Sam will hear from Patrick Drake (Jason Thompson) that he’s all-in with Robin and they are definitely done. In fact, GH spoilers hint that Patrick may put a ring on Robin’s finger and they could have a quickie wedding before they leave town in January.

Now that she’s back in Port Charles, Anna Devane (Finola Hughes) checks in with Mac Scorpio (John J York) who tells her the body in the morgue was Kyle Sloane (Robb Derringer). Now they can refocus their efforts to take down Paul Hornsby (Richard Burgi).

Paul’s evil plan to dominate Port Charles is falling apart on all fronts as Tracy Quartermaine (Jane Elliot) tells him she’s had enough of his philandering and kicks him out of the Q mansion. Paul also has to talk her out of airing his dirty laundry in public.

Nikolas Cassadine (Tyler Christopher) pulls out of his health crisis and decides to use his injuries to his advantage by blackmailing Jason. Hayden Barnes (Rebecca Budig) also won’t back down when Liz Webber (Rebecca Herbst) pleads with them to let Jason off the hook.

Later, Hayden meets with Curtis (Donnell Turner) who gives her the proof that she was the target of the shooting – will he also have proof that Nikolas ordered the kill or is that revelation still to come? Either way, Nik has some explaining to do soon.

Kristina Corinthos (Lexi Ainsworth) reveals to Morgan the extent of the trouble she’s in at school and he shares some of his own troubles. It’s nice the brother and sister can confide in each other – both agree to keep the parents out of the loop.

Michael Quartermaine (Chad Duell) and Sabrina Santiago (Teresa Castillo) have a talk about the state of their relationship. Will Michael dump Sabrina? Looks like he’s mad enough to call this off and you can’t really blame him.

Johnny Zacchara (Brandon Barash) and Lulu Spencer (Emme Rylan) put their plan into effect against Valerie Spencer (Brytni Sarpi) to try and destroy her career as a cop. Then on the Haunted Star, Johnny kisses Lulu. What will that turn into?

Carly Corinthos (Laura Wright) is shocked by something she sees – is it Sam and Jason about to kiss or something else? Also looking for NY romance is Franco (Roger Howarth) who finally takes lady love Nina Clay (Michelle Stafford) to bed.

There are new shows Monday December 28 thru Wednesday December 30. Then on New Year’s Eve, December 31 there will be a rerun of an older GH and then on Friday, January 1, GH will be preempted for football.

Watch the new shows then come back to CDL for tons more “General Hospital” spoilers and news all week long.