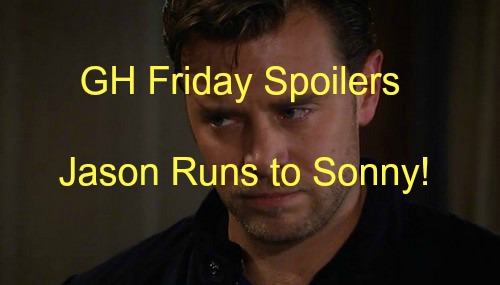 “General Hospital” (GH) spoilers tease that even though Jason Morgan (Billy Miller) knows the whole truth, the drama is just getting started. Jason goes to unlikely ally Sonny Corinthos (Maurice Benard) to talk about his troubles.

Sonny will be stunned that Jason turned to him since their last encounter was less than successful but Jason needs a man’s consultation – someone without a pony in the race. Jason can’t go to Carly Corinthos (Laura Wright) since she’s Team Sam.

Damien Spinelli (Bradford Anderson) is too far away. So Sonny is the closest thing Jason has to a friend – and someone who will be on Team Jason, not siding with one of the women. Jason shares that Liz Webber (Rebecca Herbst) has been lying for seven months.

Sonny will listen and offer some sound advice, but he also needs to vent to Jason about his troubles. Jason hears Sonny out about the wheelchair battle, the Avery custody loss, and Morgan Corinthos’ (Bryan Craig) mental issues.

Will this talk lead Jason back to Liz? Or to find Sam Morgan (Kelly Monaco)? More likely, Jason will focus his anger on Nikolas Cassadine (Tyler Christopher) – the mastermind of this mess. Look for Jason to go after Nik next week – did Sonny advise revenge?

Sam is also reeling from the fallout of the Jason secret reveal. Patrick Drake (Jason Thompson) has cut her loose and now Sam has to make a plan on the fly. Sam heads to her parents – Julian Jerome (William deVry) and Alexis Davis (Nancy Lee Grahn).

They are going to want to know why she’s there with a suitcase in hand – Sam has to explain how Jason’s reveal has ripped her from Patrick. Is Danny Morgan with her? Is Sam there to stay or is it just for the night? What’s next for Sam?

Liz is also in shock from being dumped and turns to partner-in-crime Nikolas to discuss what could happen now that Jason knows the truth. They have to brace themselves for repercussions. Now that Sam and Jason know, the rest of Port Charles will soon know too.

Over at the MetroCourt, Ava Jerome (Maura West) chats up Kiki Jerome (Hayley Erin) who’s waitressing. Is Kiki still going to give her mom the cold shoulder? And Ava gets green-eyed with jealousy when she sees Paul Hornsby (Richard Burgi) with a woman.

Morgan chats up Carly about his bipolar. He doesn’t like the idea that everyone is watching him, monitoring him, waiting for him to screw up. Morgan says he has to deal with this himself, but GH spoilers tease he’ll be off the rails again soon.

Morgan doesn’t like his meds and starts messing with them and the results will be disastrous. Will Morgan’s family have to take more extreme steps to get him back on track and keep him there? How far out of line will Morgan get?

Over at the Floating Rib, Hayden Barnes (Rebecca Budig) gets news from Curtis (Donnell Turner), but it will come at a cost. Does Shawn Butler’s (Sean Blakemore) crony want money or does he want Hayden to get Shawn out of Pentonville?

Don’t miss a moment of cliffhanger Friday and then come back to CDL for more “General Hospital” spoilers, gossip and more.