General Hospital (GH) Spoilers: Will Jason Get Both Sam and Liz Pregnant in Aftermath of the Reveal? 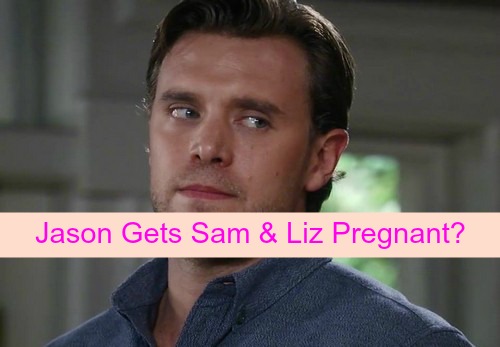 “General Hospital” (GH) spoilers indicate that the fallout from the Jason reveal is far from over and that Sam Morgan (Kelly Monaco) and Liz Webber (Rebecca Herbst) are about to go head-to-head in a fight for the man they both love.

The children that each of them share with Jason Morgan (Billy Miller) will, no doubt, become fodder in the fight for the sexy amnesiac, but could unborn children also come into play? Could one or both of these warring women turn up pregnant in coming months?

Liz has known for months that there was a chance Jason would recover his memories, find out she’d been lying to him, and possibly dump her. But Liz also knows that Jason loves kids – he loves all three of her boys – and is as devoted to them as he is to Liz.

Jason is overjoyed to now know that he has two biological kids – Danny Morgan and little Jake Spencer (James Nigbor). But was Liz laying the groundwork to further tie Jason to her with an “unplanned” pregnancy?

Liz could have ditched her birth control weeks ago to set the stage for a pregnancy to occur around the time of their wedding to further cement Jason to her. This would be perfect timing for the news to come out just as Liz’s lies are also exposed.

On one hand, Jason will be angry that she’s lied to him. But, on the other hand, he will be thrilled to go through a pregnancy and birth with Liz without being a hitman who has to lie about his children’s paternity.

But what could make this already-messy situation even messier is if Sam also turns up pregnant. We know from recent video clips leaked by showrunners that Sam and Jason will share a passionate kiss that could reignite their passion.

Even if Jason doesn’t recall his love for Sam, the attraction will be undeniable. This could lead to sex, even if Jason regrets it later because he feels like sex with his wife is cheating on his fiancée Liz. And Sam might deliberately try to get preggers, just as Liz could.

If Sam and Liz turn up pregnant, it would be a double dilemma for Jason, but could also raise questions about the paternity of Sam’s child since she’s been shagging Patrick Drake (Jason Thompson) recently.

If either Sam or Liz turned up pregnant, it would deliciously complicate the #JasonRevealed plot line. But if both did, that would be absolutely delicious. We can’t wait to see how down and dirty the fight gets between Liz and Sam over Jason – and whether baby making is in the mix.