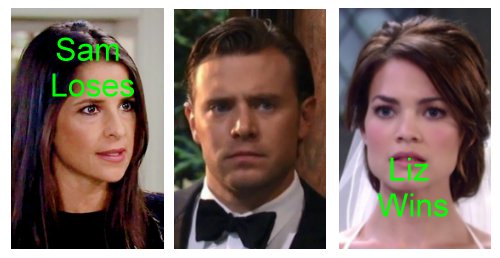 “General Hospital” (GH) spoilers indicate that Jason Morgan (Billy Miller) is ready to move on with Liz Webber (Rebecca Herbst) and put his past with Sam Morgan (Kelly Monaco) behind him for good. At Thanksgiving dinner, Jason will tell the Quartermaines that Helena Cassadine (Constance Towers) has died and took any answers she had with her to the great beyond, but he’s over it.

You have to wonder how hard Liz worked on Jason on their flight home to get him to accept the disheartening news that his memories are gone for good. This is a huge win for Liz, big fail for Sam!

For a minute there on Cassadine Island, when Jason asked Helena who knew that Jake was Jason and for how long, Liz totally thought she was busted for her months of lies – but then BAM! Liz had to be cheering on the inside when Helena collapsed and died – ever see a more half-hearted attempt at reviving someone? Helena croaking is the best thing ever for Liz.

The only wildcard in the bunch is Hayden who could blab the truth if it benefits the side game she’s playing with Tracy Quartermaine (Jane Elliot) for ELQ. Got to keep an eye on Hayden – she can’t be trusted.

For now, Liz is confident and it looks like she’s talked Jason into pushing forward with their life even at the cost of what he did have – and could have with Sam and Danny. Liz doesn’t care about them. Jason will also reveal that he and Liz will go through with their wedding but there will be a bit of a delay since it turns out Jason is still married. The next step is to demand a divorce from Sam.

Liz will push Jason to file for a quickie divorce so she can get him locked down as her hubby before anything else gets in her way. But that’s going to hurt Sam and Liz will have to handle Jason right on this issue.

Of course, Sam just told Patrick Drake (Jason Thompson) that she’s all about her life with him and Jason is dead to her – the Jason she knew is gone. But Sam is lying like a dog on a hot day. Patrick must have on rose colored glasses to take what Sam said at face value. She still so obviously loves Jason and just kissed him to try and “Snow White” him back to a recovery.

And then she packed up and followed him to Greece. That line about them feeling like buddies when she and Jason are together was so contrived. Sam was totally into that kiss they had and wanted it to go further.

So when Jason comes and drops off divorce papers, Sam may crack up. Will that be the straw that breaks Patrick’s skewed view of his future with Sam? Will Patrick dump Sam then?

And even when Liz’s secret comes out that she’s been withholding the truth from Jason, fans may need to brace themselves that Liason may not be done even then. She and Jason have a strong connection.

Jason may stick with Liz once he works through his anger at her lying – and Sam could be left out in the cold, divorced by Jason, dumped by Patrick and all alone as a single mom. Jason’s Thanksgiving announcements will take this plot in a new direction with the understanding that his brain cannot be cured – so far as anyone knows – and he has to go on from here.

But coming weeks will bring more developments. Robin Scorpio (Kimberly McCullough) may be able to help and Jason’s brain may continue healing on its own. But it’s doubtful he’ll revert to Stone Cold Jason as he once was.

For now, though, it looks like it’s game on for Jason and Liz – marriage, kids, and what Liz hopes will be the happily ever after she’s always wanted with Jason – no matter how many people she has to crush to get what she wants!

Share your thoughts in the comments section below on Jason, Liz and Sam and check back with CDL often for more “General Hospital” spoilers, gossip and more – all week long.