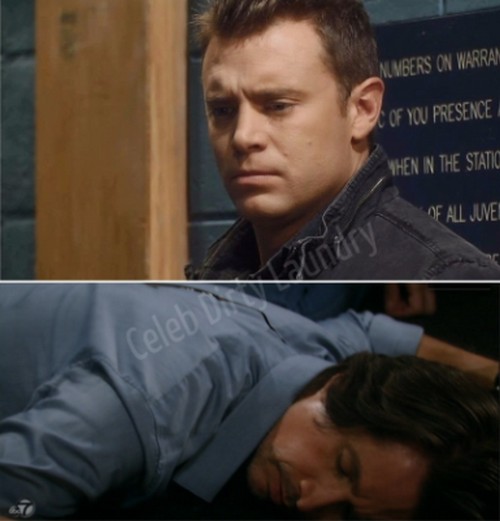 General Hospital spoilers tell CDL that as Silas’ murder is solved Jake identity reveal will materialize at last. Brace yourselves GH fans, the talk for the month of August will be who killed Silas Clay (Michael Easton) giving TPTB more time to pedal around Jake Doe’s (Billy Miller) true identity. They continue to get our hopes up only to dash them with MORE AMNESIA – but this time fake amnesia by Hayden Barnes (Rebecca Budig). CDL reported that Jake will know he is Jason this summer but will keep it to himself… and the big reveal to all Port Charles will be during fall sweeps with Robin (Kimberly McCullough) coming back to announce it.

While the writers think they are distracting us from the “Jason” storyline it is just the opposite – if the “who killed Silas” storyline was interesting it might have worked but most GH fans are restless so they will wade through the storm waiting for Fall. What we have is Dr. Clay dead and innocent Franco (Roger Howarth) being accused, oh yes that is original (eyeroll).

Franco is leaving Clay’s apartment and Kiki (Hayley Erin) shows up – BAM Franco is guilty which means we have just disqualified Franco – too obvious. Everyone can speculate Ric Lansing (Rick Hearst) & Madeline Reeves (Donna Mills) but they had no reason to off Dr. Clay as they both got what they wanted. Nina (Michelle Stafford) checked herself into the looney bin and is primed for the money pickings. People can speculate Morgan (Bryan Craig) but Morgan is NOT a cold blooded killer like Ava –

Morgan has a good heart despite growing up in the mob and as a matter of fact a year ago at this time people were complaining he was whiny Morgan – now he is a young man but still has the same heart, a heart that broke when he accidentally shot his second father figure and Sonny’s (Maurice Benard) right hand man Max (Derk Cheetwood). Morgan was even disgusted with Ava when he found out the truth of what she did to Connie – there is no way this kid would stab someone in the back. The only suspect in the running is the cold blooded reptile herself, Ava Jerome AKA Denise DeMuccio. This time Ava made it personal she stabbed Silas in the back because the coward didn’t want to look the man who saved her life in the eyes.

The last time Ava got desperate she shot Connie Falconeri (Kelly Sullivan) point blank in cold blood AND took advantage of A.J. Quartermaine’s (Sean Kanan) alcohol addiction by setting him up and making him believe he shot Connie during a blackout he had. Ava lived that lie for over a year it was finally revealed she did the dirty deed, yet she has still not paid for her crime and has likely committed another one – Silas Clay.

Ava will try to set Franco up on the murder charges just as she did A.J. – the only problem is Franco knows who she really is and what will he do with that information? Franco is basically holding his get out of jail free card. Franco can be just as dark and sinister as Ava and he is smart – the only saving grace to this storyline is that Liesl Obrecht (Kathleen Gati) and Franco will have scenes together – what a great friendship and very entertaining duo.

By the time this storyline comes to an end we will be saying goodbye to Ava Jerome and hello to Jason Morgan (Billy Miller) so sit tight GH fans, the longest summer in GH will be over soon. What do you think CDL’ers will Ava get away with cold blooded murder again? Stay with CDL for more up to the minute GH updates. Leave your thoughts and comments in the comments below.