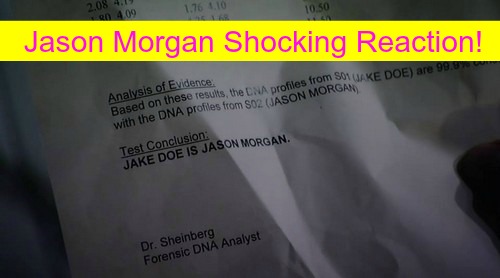 The big day is here folks – “General Hospital” (GH) spoilers show that we are getting the  #JasonRevealed and this must-watch TV. If you saw the ABC promo video of the reveal, you may have noticed that when Jake Doe (Billy Miller) tells Liz Webber (Rebecca Herbst) and their wedding guests that he’s Jason Morgan, he does not look like a happy man.

His jaw is tense and he looks murderous. But before you assume that ire is directed at his fiancé (AKA big fat liar Liz), think again…

Even though Jake doesn’t have memories of his life as Jason Morgan, he does have some information already about how he ended up where he is. Jake knows he was in Cassadine hands just before he was rolled into the ER and had life-changing plastic surgery that put him into this unimaginable predicament.

Jake has suspected for a while that Nikolas Cassadine (Tyler Christopher) knew his identity but wasn’t telling him and Jake will go after smug bastard Nik in anger.

Jake was ready to marry the woman he thought was the love of his life and his savior – Liz – when Carly Corinthos (Laura Wright) hits him with the reveal. Once Carly convinces him today – by showing him the DNA report as proof – Jake is going to be simultaneously heartbroken and infuriated.

He really wants to marry Liz and be a father to her kids. Plus he’s going to know straight away that little Jake Spencer (James Nigbor) was speaking gospel when he said Jake’s his daddy.

Jake won’t know straight away that Liz has been lying to him, but what he does know is absolutely true is that Nikolas has been plotting against him. Plus Jake knows that Nik’s evil granny Helena Cassadine (Constance Towers) did this to him by addling his brain with that mind-controlling microchip implant.

We can expect Jake to lash out at the only person in the room he knows for certain is at fault – Prince Nikolas. Jake will have to be stopped by their wedding guests from killing Nikolas.

We’ve seen Jason murder with his bare hands recently – and Nik knows how dangerous the former hit man is so he should be wetting his silk undies when Jake attacks him. But even after Jake is dragged off of Nikolas, he will want answers from the evil prince, but will Nikolas refute him?

After all, no one can make Nikolas answer and anything he says will only make him look worse – and reveal his master plan for ELQ – so don’t count on Nikolas to say anything much that will help Jake out.

Nikolas has nothing to gain from telling the truth, so why would he? But Helena has all of the answers that Jake needs – she knows things about the ‘Jason to Jake’ transformation that Nikolas likely doesn’t know at all.

Billy Miller has been on-screen for months as the Jake plot has been in the forefront and he’s taking some time off after November sweeps, so we may see the explanation for his exit as him going to Cassadine Island to confront Helena about what she’s done and to seek some truths.

The other question is whether Nikolas will throw Liz under the bus to protect himself. If Nikolas tells Jake that Liz has known for months who he is, it would certainly take the heat off of him. No matter what you say about Nikolas, though, he does care about Liz and will likely take the heat rather than rat her out.

But the woman at Nikolas’ side, Hayden Barnes (Rebecca Budig), has no such loyalty to Liz and may spill the beans to Jake now or very soon.

We know Hayden has her memory back and she already knows that Nikolas tried to have her killed and has been plotting with Liz about her and Jake for months. Hayden also has a mystery partner we haven’t seen yet – our money is on Paul Hornsby (Richard Burgi) but it could be another Cassadine since there’s talk of both Helena making appearances again plus another evil Cassadine in the mix soon – maybe Valentin. No matter what, look for Jake to seek revenge on the Cassadines.

After all, not only did the Cassadine clan ruin his past life with Sam Morgan (Kelly Monaco) by taking him away after he was shot, but they have now also wrecked his newfound happiness with Liz. With no memories of his life as Jason to tether him after the reveal, all Jake has to focus on is anger, so Nikolas had better watch out.

Nik has messed with the wrong man and his money and influence will not be able to get him out of Jason’s crosshairs! Stay tuned to CDL today for more on the big Jason reveal and other “General Hospital” spoilers, gossip and more.