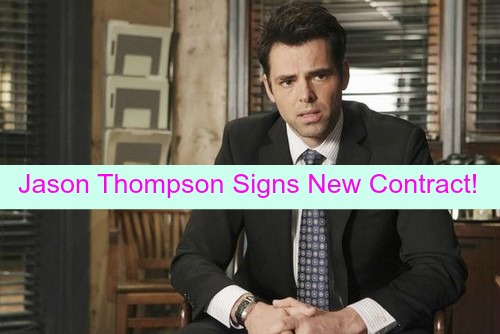 “General Hospital” (GH) spoilers tease that fan favorite Jason Thompson will not be leaving the soap opera for quite a few months. A few weeks ago, the handsome actor announced that after a decade portraying the iconic Dr. Patrick Drake, and it was assumed he’d leave the role in December when he fulfilled his contract.

Soaps in Depth reports that the handsome actor signed a contract extension, keeping Dr. Patrick in Port Charles for another four months. Fans had wondered how TPTB would write him out of the storylines. At the moment, the ABC soap opera has not announced Jason Thompson’s replacement.

The only clue fans have that Patrick will be recast is when “General Hospital,” stated that they had plans to issue a blind casting call and test the actor’s chemistry with leading ladies he’d interact with on screen.

An unconfirmed report stated that the soap opera already had their sight set on a major actor to step into Dr. Drake’s scrubs, implying that Michael Muhney could be his replacement. Immediately fans were ecstatic that they COULD see Michael Muhney back on daytime television. The general thought was that Muhney would be an excellent recast option.

It makes perfect sense that they’d want Jason to sign a contract extension right now. There is so much going on the show between Jason Morgan’s [Billy Miller] reveal to Dr. Robin Scorpio’s [Kimberly McCullough] brief return airing on Nov. 13.

It seems likely that Patrick could feel extremely confused with everything going around him. Sam [Kelly Monaco] has expressed she feels very conflicted, knowing her husband is now alive- even if he doesn’t remember their lives together. Adding to that stress, he finds out that Robin is in trouble and being held hostage, according to Soap Opera Digest.

Jason Thompson has not confirmed his contract extension at this time. CBS Soaps in Depth reported that he signed a contract extension, so he could wrap up his ongoing storylines. He is expected to wrap up his storylines and exit the ABC soap opera by March 2016. But once Jason is signing extensions do you think he could wind up staying on the show? Don’t forget to come back later for juicer “General Hospital” spoilers, rumors, and news!