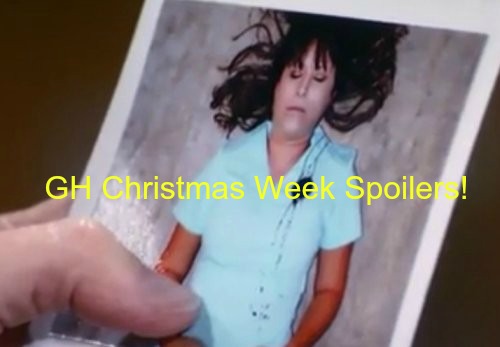 “General Hospital” (GH) spoilers for Christmas week, Monday, December 21 through Thursday, December 24 include a daring rescue, an interrupted booty call, a love confession and a romantic proposal. Read on to see what happens with Robin, Patrick, Ava, Paul, Sam, Jason and more.

At the Nutcracker Gala, Sam Morgan (Kelly Monaco) is self-conscious because she’s not done up fancy – she just stopped by for her mom. After a run in with Jason Morgan (Billy Miller) and Liz Webber (Rebecca Herbst), Sam runs to swill some booze on a MetroCourt balcony.

Jason finds her there and Sam tells him she and Patrick Drake (Jason Thompson) broke it off because she still loves him, loves him more than Patrick. Sam is fibbing a bit here – she begged Patrick not to dump her after she thought Jason was sticking with Liz, but he kicked her to the curb anyway.

Nonetheless, Sam throws it out there that she’s still into Jason. Liz meanwhile is also boozing to make it through the Gala after Dr Obrecht (Kathleen Gati) told her she can’t leave. Liz makes a quip as she enters the party with Dr O and Franco (Roger Howarth) that the three pariahs are there.

Later when she’s tipsy, Liz throws Laura Spencer (Genie Francis) under the bus to Jason as being part of the big identity lie. Laura says she’s sorry then hauls a drunken Liz away. But later, Jason comes back to Liz and they share a close moment. Sam sees and it hurts her feelings.

Also at the Gala, Paul Hornsby (Richard Burgi) makes a quick speech because all he can think about are the sexy panties and hotel room key that Ava Jerome (Maura West) left for him. Later, Ava calls to tell Paul her hotel room number. Dummy DA Paul says the room number aloud.

Dillon Quartermaine (Robert Palmer Watkins) overhears and thinks Paul got a room for Tracy Quartermaine (Jane Elliot) so Dillon tells his mom and she heads upstairs thinking she and Paul are going to get romantic. Too bad Paul is horizontal with Ava when Tracy walks in. Whoops!

Things are going better for Port Charles’ other silver fox Julian Jerome (William deVry). He got permission from Alexis Davis’ (Nancy Lee Grahn) daughters to put a ring on it. Alexis freaks out thinking he’s giving her bad news then he proposes and rocks her world.

That means no way is Mikey the baby daddy. Duh… Michael goes to confront Sabrina who was chatting with Santa aka Carlos Rivera (Jeffrey Vincent Parise). Carlos scuttles out unnoticed and Michael confronts Sabrina. She’s caught. But will she tell Michael Carlos is the father?

Carly Corinthos (Laura Wright) will also come at Sabrina soon for trying to run a pregnancy scam on her son. Of course, Carly is the local expert on pregnancy scams after the shenanigans she pulled while pregnant with Michael – seems like baby daddy karma came back around to Carly…

Carly also isn’t happy that Sonny Corinthos (Maurice Benard) refuses to go to the Gala. He’s working on taking down Ava and doesn’t want to go in the wheelchair anyway. Kristina Corinthos (Lexi Ainsworth) comes to see her dad for holiday selfies but is still hiding her college troubles.

Later, Sonny will chat with Sam about their shared past. Plus Sonny and Carly will have to come to Jason’s aid after Nikolas Cassadine (Tyler Christopher) provokes Jason into assaulting him. This is part of Nikolas’ plan B to keep his greedy Cassadine hands on ELQ.

India Arie performs at the Gala and Crimson’s new editor Nina Clay (Michelle Stafford) leverages the event to turn Crimson into a hit with help from Dillon and Maxie Jones (Kirsten Storms). Too bad for Julian – but maybe the engagement will take the sting out of him not getting that tax deduction.

Later, Laura figures out that Lulu Spencer (Emme Rylan) is up to something but she has no idea how deep Lulu is getting. Johnny Zacchara (Brandon Barash) and Lulu are scheming against Valerie Spencer (Brytni Sarpi) and it looks like they may target her job to take her down.

Jason will soften towards Liz and is reconsidering the split, but Liz doesn’t know that and has to tell her boys that Jason is gone. Closer to Christmas, Jason will recover some memories of life with Sam and these could spark some romantic emotions towards his estranged wife.

Ava and Kiki Jerome (Hayley Erin) enjoy a thaw in their relationship thanks to the holiday and Kiki spends some time with baby Avery. Kiki also helps Sonny out – does this have to do with him getting time with his baby daughter?

Later, Sonny’s boys all have bad news to share and the brothers support each other. Dante Falconeri (Dominic Zamprogna) talks about his marriage woes, Morgan Corinthos (Bryan Craig) whines about his mental mess and Michael has to tell them he’s not the baby daddy.

The big news of the week, though, is the Robin Scorpio (Kimberly McCullough) rescue. When Patrick, Anna Devane (Finola Hughes) and Robert Scorpio (Tristan Rogers) bust into the Cassadine compound, they’re told that Robin is already dead.

The law will scoop up uber-villain Jerry Jacks (Sebastian Roche) and Patrick will head off to the tomb where he’s told Robin’s body is – sure enough, she looks dead. Fake out! Robin took a mystery chemical to slow her heart and make her appear deadish.

Patrick is aggrieved, but when he gives her a farewell smooch, Robin pops back to life. Aww… Patrick and Robin will head back to Port Charles in time for Christmas. Robin and Emma Drake (Brooklyn Rae Silzer) have a heartfelt reunion – Emma really needs her mom now.

Back in town, Anna puts on a sexy Mrs Claus suit and Kiki plays elf with her. This is all leading up to Patrick’s exit from town in coming days – Robin will head out with him and Anna will stay behind with Emma – Robert also checks back out of General Hospital.

Don’t miss a moment of next week’s action – new shows Monday through Thursday, December 21 through 24, then no GH on Christmas Day. But CDL is here every day with all-new detailed “General Hospital” spoilers and news. Check beck with CDL daily for all your GH info!

In terms of this week’s schedule here it is from Nathan Varni:

GENERAL HOSPITAL update: today’s show (Holiday Ball) will now air on MONDAY DECEMBER 21 due to today’s pre-empt. India Arie’s performance will now air Tues Dec 22. AND instead of an encore on 12/24 we will now air an original. Have a great weekend and happy holidays! Just heard Canada did not see today’s episode either, so all will see on Monday