General Hospital (GH) Spoilers: Jason’s New Life Alone – Who He Dumps, Where He Goes, and What’s Next? 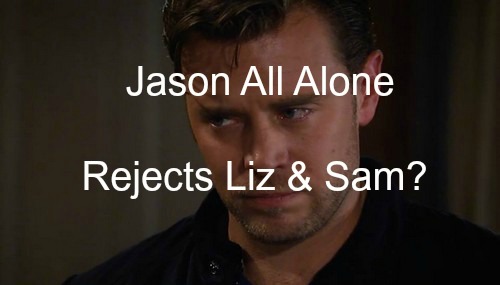 “General Hospital” (GH) spoilers tease that Jason Morgan (Billy Miller) is furious at Liz Webber’s (Rebecca Herbst) lies but it’s not himself he’s concerned about. Typically Jason that he’s more worried about other people than his own well-being.

What is nagging at Jason is that Liz was going to let Danny Morgan and Jake Spencer (James Nigbor) live their lives not knowing their dad was alive and let him live not knowing he had kids. That’s what Jason can’t get past.

But what he also can’t get past is that he still loves Liz and doesn’t have romantic feelings for Sam Morgan (Kelly Monaco). If Jason’s memory came back and he remembered his passion for Sam, the path ahead would be easy for Jason.

On Monday, December 14, Jason will turn up at Liz’s place again and then walk out on her again. Does Jason want to try and work it out with Liz or is he too deeply mired in his anger?

While Jason came to talk things out with Liz, Sam once again interrupted with a phone call. Despite Sam’s insistence to her parents that she was not going to make a play for Jason, she is. Sam wants to know if he and Liz broke up and if she has a shot.

But Jason feels like an unraveled rope in a tug of war between long-time rivals Sam and Liz. Jason will likely not want to be around either of them right now. Carly Corinthos (Laura Wright) also has been uber-pushy.

Remember that Diane Miller (Carolyn Hennessy) told Jason about all his assets? She mentioned the penthouse he owns and Jason may take up residence there again. It would be great for fans to see Jason back in that space.

He will not feel at home with Liz anymore and Sam is at her parents – plus he’ll need space from both women, so a place of his own makes sense. And you have to wonder whether being back in that space will bring back some of Jason’s memories of Sam.

Will Jason be able to move past his feelings for Liz and rekindle with Sam? Or will Jason be so tormented by the Sam-Liz rivalry that he’s ready to move forward with his life with neither of them in his bed? Perhaps Jason needs a romantic fresh start.

What do you think GH fans? Would you like to see Jason with Sam, Liz, or playing the field with the other ladies of Port Charles? That would certainly break new Jason out of the “old Jason” mold and open up new and interesting storylines.

Stay tuned to CDL for more on the final Jason reveal and the messy and emotional aftermath as well as daily “General Hospital” spoilers, gossip and news!